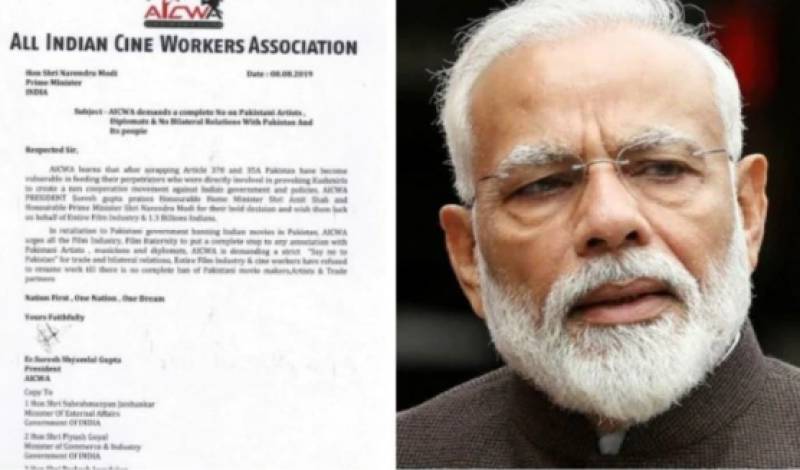 MUMBAI - The All Indian Cine Workers Association (AICWA) has written an open letter to Indian Prime Minister Narendra Modi demanding a ban on already banned Pakistani artists. It also called for the need to cut off all sorts of bilateral relations, including diplomatic ties with Pakistan and its people, as published by the Indian daily 'India Today'.

“AICWA urges all the film industry, film fraternity to put a complete stop to any association with Pakistani artists, musicians and diplomats. AICWA is demanding a strict ”say no to Pakistan” for trade and bilateral relations. The entire film industry and cine workers have refused to work till there is no complete ban of Pakistani makers, artists and trade partners," read the letter. 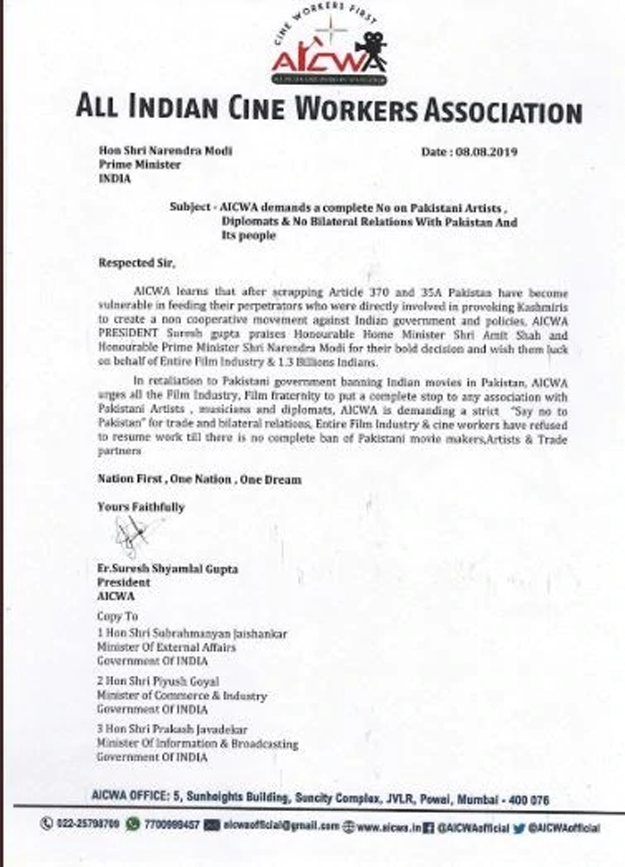 Earlier on Thursday, Pakistan announced the banning of Indian films from its cinemas across the nation. Firdous Ashiq Awan, the special assistant to Prime Minister Imran Khan on Information and Broadcasting, claimed this action was in retaliation to India”s abrogation of Article 370, which gave special status to the state of Jammu and Kashmir and allowed it to have a separate constitution, a state flag and autonomy over the internal administration.

Apart from demanding a ban once again, AICWA President Suresh Shyamlal Gupta praised Modi for his “bold decision” of scrapping Article 370. “AICWA learns that after scrapping Article 370 and 35 A Pakistan has become vulnerable in feeding their perpetrators who were directly involved in provoking Kashmiris to create a non-cooperative movement against the Indian government,” the letter stated on behalf of Gupta.

It further praised Modi and Home Minister Shri Amit Shah for their unanimous decision and wished them luck on behalf of the entire film industry and 1.3 billion Indians.