US Muslims rally to express solidarity with Kashmiris under Indian occupation 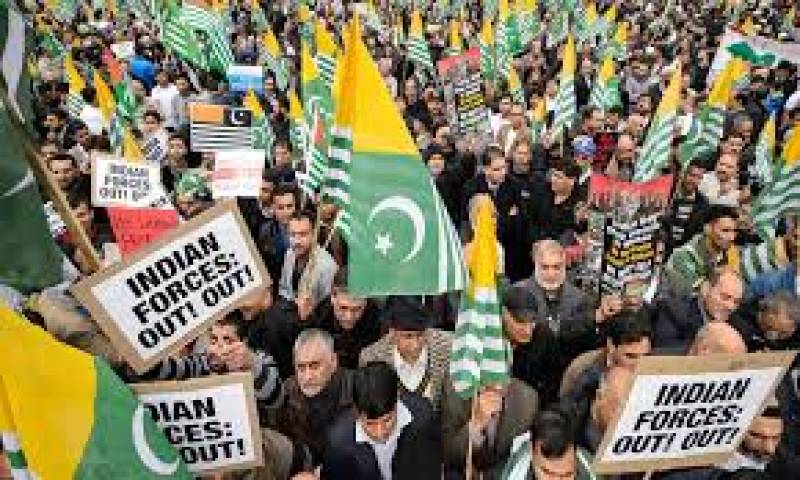 NEW YORK - Hundreds of American-Muslims came together in New York on Friday in an extraordinary demonstration of support and solidarity with the Kashmiri people who are under siege since India's annexation of occupied Kashmir that has sparked of a crisis in the disputed region.

Apart from Pakistanis and Kashmiris, those demonstrating in front of Indian Consulate included Turks, Arabs, Bangladeshis, Bosnians, black and white Americans. Among the protestors were students from Columbia University, an elite American education institution.

The rally, held under tight police security, was sponsored by "Stand with Kashmiris", an umbrella body established, among others, by the Islamic Circle of North America (ICNA) and the Council of American Islamic Relations (ICNA).

Speakers at the rally called for the Indian government to immediately reinstate the protected status of the disputed state, lift the siege, and enter into peaceful negotiations to determine the future Occupied Kashmir in accordance with the UN resolutions.

Earlier, Kashmiris and Pakistanis, joined by Sikhs, staged a protest demonstration in front of the Indian Mission to the United Nations, which is located several blocks away from the Indian Consulate.

Among the Kashmiri leaders who addressed the demonstrators were Ghulam Nabi Fai, Sardar Sawar Khan and Capt. (retd) Khalid Shaheen Butt who called for unity at this critical hour to counter India's move to change the demographic character of occupied Kashmir.

Sikh leader Amarjit Singh, who also spoke, said that the Sikh nation will standby the Kashmiris in their struggle to get rid of the Indian yoke.

Fai, who is secretary-general of the Washington-based World Kashmir Awareness Forum, expressed satisfaction over UN Secretary-General Antonio Guterres a statement that reaffirmed UN resolutions on Kashmir and that the dispute should be resolved through dialogue in accordance with the UN Charter.

He said the SG's statement debunks India's claim that the Kashmir was India's integral part.

The resolution also calls for refraining from taking steps that could affect the status of Jammu and Kashmir.