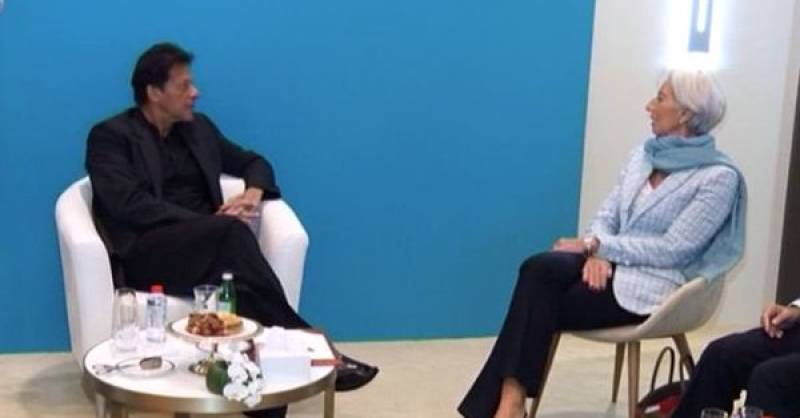 DUBAI – Prime Minister Imran Khan on Sunday held a one-on-one meeting with International Monetary Fund (IMF) Managing Director Christine Lagarde on the sidelines of the World Government Summit, hosted by Dubai, to discuss conditionalities that have held up the accession to fund's bailout programme.

A press release issued by the IMF said Lagarde's meeting with the Pakistani premier had been "good and constructive".

“I had a good and constructive meeting with Prime Minister Khan, during which we discussed recent economic developments and prospects for Pakistan in the context of ongoing discussions toward an IMF-supported program.

“I reiterated that the IMF stands ready to support Pakistan. I also highlighted that decisive policies and a strong package of economic reforms would enable Pakistan to restore the resilience of its economy and lay the foundations for stronger and more inclusive growth. As emphasized in the new government’s policy agenda, protecting the poor and strengthening governance are key priorities to improve people’s living standards in a sustainable manner,” the IMF statement read.

Earlier, Information Minister Fawad Chaudhry said the Khan-Lagarde meeting would "give us a chance to understand the IMF views and we will be able to give our version to IMF chief", Radio Pakistan reported. Chaudhry claimed that Pakistan wants "a fair deal that can actually help Pakistan in the short-term without affecting our long-term economic goals".

On Sunday evening, PM Imran Khan addressed the 7th edition of the WGS ─ an annual gathering of heads of states and governments, policy makers and experts. The summit will provide an opportunity to discuss improvement in governance through reform, innovation and technology.