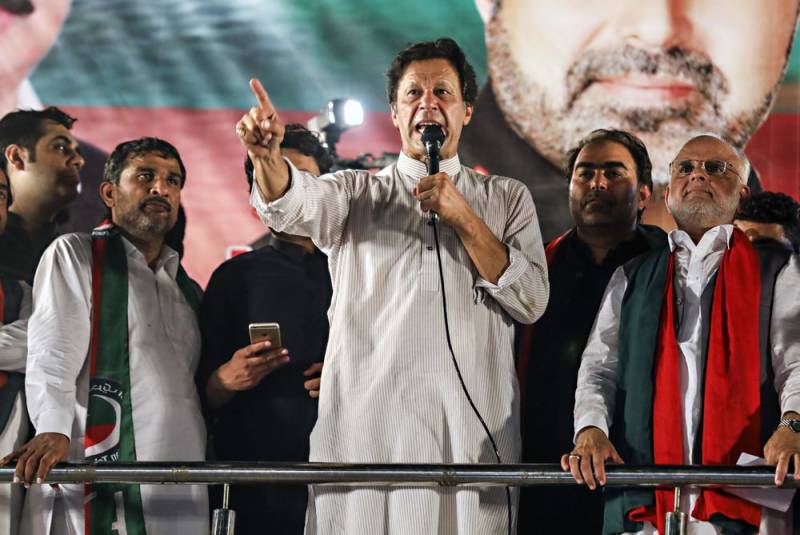 Prime Minister Imran Khan’s administration is focused more on creating political conditions which will enable him to come down hard on opposition figures publicly perceived to be icons of corruption, and less on oozing out the very menace of corruption from a political system marred by unending underhand deals and selective accountability.

The anti-graft laws have been least invoked against the military generals and political leaders from the ruling alliance – unlike the opposition leaders - which has added an element of controversy to the ongoing anti-corruption drive. Nonetheless, the ongoing anti-corruption drive carries biting teeth against the allegedly corrupt opposition leaders who have a history of surviving through secret deals in the past.

The opposition’s narrative that the anti-graft prosecuting agency, the National Accountability Bureau (NAB), is pursuing selective accountability makes some sense. The NAB has slowed down the pace of its investigations and prosecutions against leaders of the ruling alliance and those of military generals involved in similar corruption cases. However, the scale and severity of corruption charges against the leaders of the ruling alliance is far less serious as compared to the opposition figures who have been ruling Pakistan for decades one after the other.

Notwithstanding the lack of across the board accountability, the opposition leaders currently on the radar of top anti-graft bodies have little to defend themselves, given the overwhelming evidence of money laundering particularly against former President Asif Zardari and his close associates.

The Sharif family is perceived to be very smart and generally leaves little proof of its wrongdoings in alleged white-collar crimes. Nawaz Sharif was caught more by his boastful public admission that he possessed all documentary proof for his family’s overseas properties and businesses with legitimate sources of income and less by the evidence the NAB and a joint investigation team had gathered against him in 2017. His admission in the Parliament entangled him in the litigation, and in the trial court he produced no proof about the sources of income with which properties were purchased. This led to a series of convictions on money laundering charges under anti-graft law which places the burden of proof onto the accused public office holder to prove the sources of income for the assets acquired during the time he/she held public office.

However, in the case of Asif Zardari, there are a plethora of proofs which investigators have discovered, revealing his direct and indirect involvement in receiving kickbacks and indulging in money-laundering through numerous bogus bank accounts. Therefore, Zardari along with his sister Faryal Talpur could possibly face disqualifications and trials on money-laundering charges in the months to come once the NAB foreseeably reconfirms the findings of the Joint Investigation Team.

Khan’s anti-corrupt agenda reconciles with the uncanny wish-list of the powerful military to politically corner mainstream leaders such as already incarcerated former Prime Minister Nawaz Sharif and former President Asif Zardari. The military has conveniently used Zardari and Nawaz and their political parties against each other over the years to further its political interests. Both leaders readily surrogated themselves to the military to shield their alleged illegal wealth, the proof of which was abundantly there with the army-run secret services. Since 2017, the secret services on the orders of the Supreme Court, has been sharing documentary evidences with the courts and investigating agencies to prosecute them in an effort to make them less relevant on the national political landscape. The charge-sheet against them carries credible evidence over their involvement in high-tech white collar crimes.

The prime reason behind military’s ire with Zardari is less due to his involvement in massive scandals of corruption and more due to his dubious role in 2011’s Memogate Scandal. Zardari, through the then country’s ambassador to Washington Hussain Haqqani, allegedly assured Pentagon that Pakistan would end its alleged backend support to Afghan Taliban, allow the US military’s foothold on Pakistan soil to hunt down militants, and freeze country’s nuclear program. The assurance was given through a memorandum Haqqani had written to Pentagon in return of preventing the military to takeover following tense ties between the then People’s Party government and the army after Pentagon’s raided on Osama Bin Laden’s hideout in northwest of the country in May 2011.

Similarly Nawaz Sharif first covertly and subsequently overtly demonstrated his frustration with the military over its alleged support to militants active in Indian controlled disputed Kashmir region. Nawaz Sharif as Prime Minister was also believed to be uncomfortable with the country’s alleged support for the Afghan Taliban.

Both leaders synced themselves with the Western narrative that Pakistan army supports the militant groups as a hedge to shield its geo-strategic interests in the region.

Both leaders are caught in the web of money laundering they created to set up businesses and purchase luxurious properties in and outside Pakistan. They are likely to continue to go through the rigours of the court battles, and there is a little possibility, at least for Zardari and Nawaz, to strike an underhand deal without agreeing to return to the “looted money” to the state.

However, media reports indicate that Nawaz Sharif is struggling to secure concessions at least for his daughter Maryum Nawaz whom he wants to prop up to replace him in the party. Maryum was released after her jail sentence on money-laundering charges was suspended by a High Court in one of three identical cases involving Nawaz Sharif and his three children in high tech white collar crimes.

Many within the ruling alliance, including Federal Minister Sheikh Rashid, fear that Shahbaz Sharif, the former Chief Minister of country’s biggest province Punjab and younger brother of Nawaz Sharif, may strike a deal to survive politically. Shahbaz, unlike his elder brother, is more acceptable to the military, provided he survives the rigours of legal battles which the anti-graft body has initiated against him regarding how he allegedly minted money through mega development projects discreetly using third parties.

The bigger threat to Imran Khan’s anti-graft drive is selective accountability, which, if it continues, would make it less credible and generate a negative public perception in a country where people are largely desensitized about the menace of corruption.

The underhand deals are yet another threat which not Khan’s administration but the country’s establishment could possibly strike with Shahbaz Sharif.

Therefore, the formidable challenge for Imran Khan is to keep the military or any other state institution away from carrying out underhand deals with the opposition, and ensure an across the board accountability, something easier said than done for a leader who has come into power with the alleged backend support of army in last year’s general elections.

That is not all. If the incumbent government fails to put the economy back on track and improve governance, the anti-corruption drive will have the least impact and will end up without being rooted out from the political system and the ruling party could face public backlash.