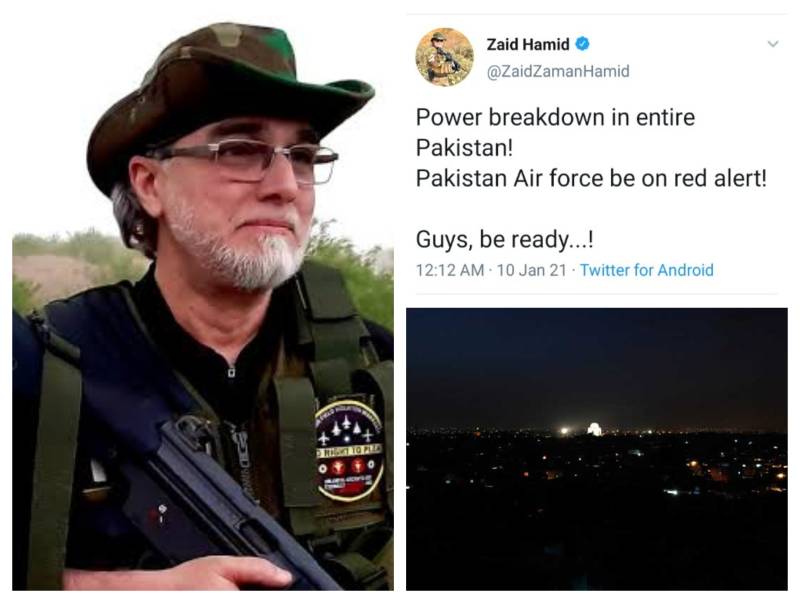 Defence commentator and columnist Zaid Hamid gathered quite a lot of unwanted attention last night as Pakistan went through the nationwide blackout by suggesting threats to national security in a tweet where he said, “Power breakdown in entire Pakistan! Pakistan Air force be on red alert! Guys, be ready...!”

Pakistani Twitterati took this by the teeth and proved once again how they deal with such statements – with wit and sarcasm. The hashtag #MartialLaw soon became trending in the country.

Judging from the tweets, we’re sure some of them were pretty upset when the blackout turned out to be just a powerline failure.

Here are some tweets that show how lightly most Pakistani people take conspiracy theories and how they deal with issues like blackouts:

Paf on a lighter note 😉.. Besides We're as a nation grateful to our elders like @ZaidZamanHamid who are always ahead of the scenario being unfolded... SURELY If something had happened then we would've been the one to regret NAUZOBILLAH #ZaidHamid #ThankyouZaidHamid#Blackout pic.twitter.com/xw2g7VM7Vc

Me : Who was enjoying deep sleep the whole night ___#MARTIALLAW#ZaidHamid pic.twitter.com/tIawCCvYFc

Some even compared the Pakistani reaction to the blackout to those of other countries when they face similar situations while others prayed for patients in hospitals and those in need of electricity for health reasons:

In Pakistan we remain calm and composed. We are also used to black outs due to the years of load shedding we suffered and continue to suffer.

Also in times of crisis not only do we make the BEST memes ever, we Pakistanis tend to be amazing at handling tough times as well.

Everyone please pray for those who are on ventilators #electricity #blackout #BlackOutPakistan pic.twitter.com/n0xtlwsoxJ

The breakdown extended as far as Azad Kashmir and Balochistan. Mobile and internet services were also affected due to the breakdown and continued to remain disrupted the next day.

On Sunday morning, Power Minister Omar Ayub said teams are facing difficulties due to heavy fog and the exact reason behind the technical fault will be identified once the fog lifts.

LAHORE – Twitterati revealed a sarcastic side of the rare event after Pakistan plunges into darkness following a ...