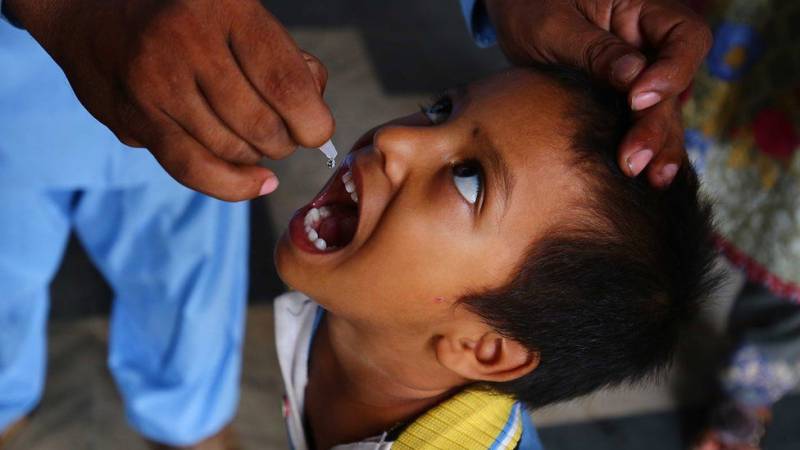 ISLAMABAD – A five-day national polio immunisation drive will start from tomorrow to vaccinate over 40 million children under the age of five across Pakistan.

A supplementary dose of Vitamin A drops will also be administered to children aged 6 to 59 months during this campaign to help build general immunity among susceptible children to protect them from polio and other diseases.

According to Pakistan Polio Eradication Program, around 285,000 polio frontline workers will visit parents and caregivers at their doorstep, adhering to strict COVID-19 precautionary measures and protocols while vaccinating children.

Special Assistant to the Prime Minister on National Health Services, Regulations and Coordination, Dr. Faisal Sultan in a statement, said the Government is committed to achieve the goal of a polio-free Pakistan which requires full support of the nation, especially from communities, the parents and caregivers of children.

Pakistan is one of the two polio-endemic countries in the world along with its neighbour Afghanistan.

Africa Regional Certification Commission (ARCC), an independent body, on Tuesday declared that Africa is a free of wild ...

In Punjab, forty eight thousand polio teams have been formed, who will be provided proper security cover during the campaign.

According to a spokesman of the Punjab Health Department, more than twenty million children will be vaccinated throughout the province during the campaign.

He said polio workers have been properly trained to follow Corona related SOPs, conveyed by the World Health Organization.

In Sindh, nine million children under the age of five years will be administered polio drops across the province.

According to the Emergency Operation Center for Polio – Sindh, Vitamin A drops will also be administered to the childern during the campaign.

In Khyber Pakhtunkhwa over twenty-nine throusand teams have been constituted which will ensure administering anti-polio vaccine to each and every child.

According to Emergency Operation Center, Khyber Pakhtunkhwa, more than seven million children up-to five years of age will be administered anti-polio drops during the campaign.

Tight security measures have been taken for security of polio teams.

ISLAMABAD – The Islamic Development Bank will provide financing of US$60 million for polio vaccine. This includes ...