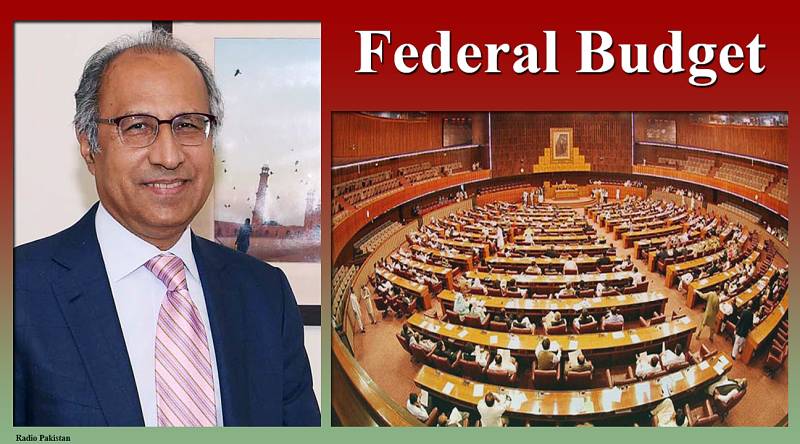 ISLAMABAD – The federal budget for the next fiscal year will be presented in the National Assembly today (Tuesday).

The meeting of the National Assembly for the budget will be started at 5 in the afternoon at Parliament House.

Earlier, Dr Shaikh said crucial decisions are being made to correct the course of the economy and stabilize it.

Unveiling the Economic Survey 2018-19 in Islamabad on Monday, he said Pakistan is endowed with natural resources including fertile land, a long coastline, hardworking people, rich minerals and a number of other assets.

Hafeez Shaikh said the government inherited a weak economy with a total debt touching Rs31,000 billion which were taken over the previous years.

He said in the coming years, Rs3,000 billion will have to be paid in terms of interest only on these loans.

The adviser said $97 billion were taken as external loans while the wealth-producing capacity of the country was increased by zero percent due to no raise in exports in all these years.

This is an alarming situation for the country's economy and the rupee is facing a lot of pressure.

Hafeez Shaikh said Rs2,300 billion were spent beyond income that resulted in printing more currency notes and leading towards inflation.

He said Prime Minister Imran Khan has shown the commitment to make difficult decisions in order to change things on permanent basis.

For this purpose, duties were increased on imports to restrict the current account deficit. Incentives were given to export industries to increase their share.

It was also decided to forge a partnership with IMF to provide a sound footing to the economy and also show the commitment that we are ready for financial discipline. A successful partnership of 6.2 billion dollars with IMF was achieved.

Dr Shaikh said the public sector institutions will be strengthened.

He said in the past the public utility companies as well as transportation, insurance and other institutions were made hollow from inside due to corruption.

The money which was to be used on health, education and other facilities to people was rather spent on these white elephants to the tune of 1300 billion rupees.

The finance adviser said effort has been made to put minimum burden on poor segments of the society.

He said Rs216 billion have been earmarked in the next budget to provide subsidy to consumers who are using low consumption of electricity.

He said the amount for financial handouts to the poor is being doubled in the coming budget.

Enumerating the priorities of the government, Hafeez Sheikh said our priorities are to stabilize the economy addressing immediate threats, improve relations with foreign countries to reap benefits, strengthen domestic industry, give a pivotal focus to marginalized people, and convince the rich to pay their due share of taxes.

He said the tax collection is very low and a large segment of the population does not want to give its share in the form of taxes.