Contempt of court? This journalist started spreading unsubstantiated rumors about IHC Judge on Facebook which turned out to be completely false 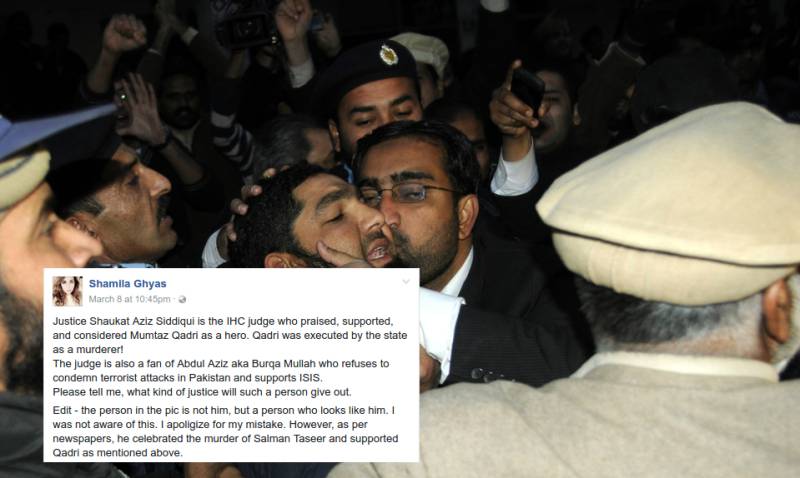 Disinformation is perhaps the oldest and effective tool that humans use to 'insulate' their irrational biases against particular individuals, party or group.

In early 2013, when Justice Siddiqui was appointed as IHC judge, a photograph of Advocate Yasir Shakeel went viral on social media. Shakeel bears a great facial resemblance to the Justice and was shown to be kissing Qadri. Those who shared the image made it seem as if a Pakistani judge was kissing a convicted terrorist in appreciation.

"Journalist" Shamila Ghyas too has been involved in disseminating this this propagandist disinformation. In a Facebook post, she initially claimed that the man kissing Qadri was the IHC judge himself without verification, even though this was her primary duty as a journalist. But what's even more morally low is her obstinacy in vilifying the honourable judge without any evidence to substantiate her claims at all. 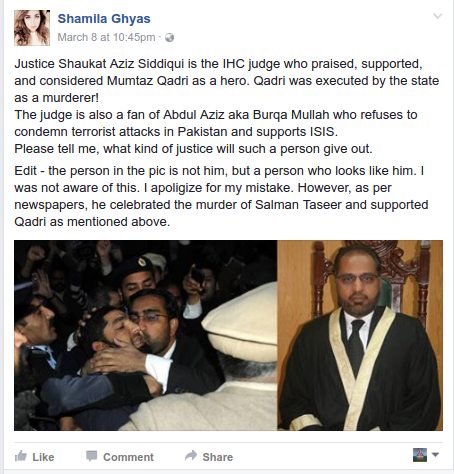 "I was not aware of this. I apologize for my mistake. However, as per newspapers, he celebrated the murder of Salman Taseer and supported Qadri as mentioned above," Ghyas hastily added as an 'apology' in an edit to her original Facebook post.

This so-called journalist is accusing the judge of supporting a convicted terrorist and celebrating the death of Governor Salman Taseer. What she seemed to forget was that this was the same judge who dismissed Qadri's appeal against death penalty and, despite serious threats from Qadri's supporters, upheld Qadri's punishment.

It is still a mystery where Shamila is getting her information from and which newspapers she is talking about. Ghyas does not seem to be aware of the fact that Justice Siddiqui was the one who grilled Mumtaz Qadri’s counsel about how a police constable was in a position to pronounce judgment or carry out a sentence against any individual, solely on the basis of his or her beliefs.

Justice Siddiqui had also asked Qadri’s defence team to explain to the court how a policeman could “determine whether an individual was an apostate or not”.

He had further emphasised how overlooking this murder could give everyone a licence to kill in the name of religion, showing his commitment to the cause of furthering justice and rule of law and preventing anarchy in Pakistan.

“In the presence of the blasphemy laws, how can we justify a person taking the law into his own hands?” he asked.

He had asked the counsel why Qadri had never tried to file a complaint against Taseer at any forum if he was sure that the governor had done something wrong.

“If this state of affairs persists, tomorrow one can be end up being punished for not reciting religious verses or wearing green turbans,” he had remarked.

Shamila Ghyas has yet to remove her status which is being widely circulated and shared even after all its points have been proven to be false.

This dangerous disinformation is symptomatic of the fact that true journalism has yet to take hold in Pakistan. It is unclear yet whether or not this is part of a deliberate strategy, but the consequences of such actions are dangerous and serve as a tool not only for character assassination, but may also bring grave harm to the individuals thus named and maligned.