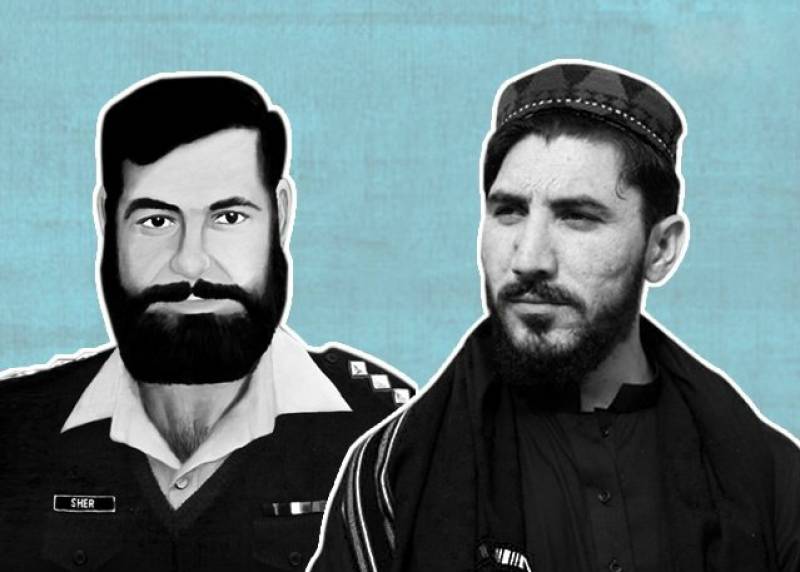 PESHAWAR – A top leader of Pashtun Tahaffuz Movement (PTM) or Movement of the Protection of Pashtuns was barred from entering the mausoleum of Capt Karnal Sher Khan Shaheed on Saturday in Swabi district’s Karnal Sher Kallay.

Manzoor Pashteen, who is in Swabi for PTM’s public meetings, visited the mausoleum of Captain Karnal Sher Khan along with his colleagues. However, Khan’s elder brother Anwar Sher Khan locked the main gate and refused to let Pashteen’s convoy in.

In a video circulating on social media, Khan can be heard saying: “I know you. I have visited your place [in Waziristan]. You haven’t come here to pay tribute to Karnal Sher’s grave. You spit venom against our country on social media”

Capt Karnal Sher Khan, who died while fighting the Indians in the Kargil sector of disputed Kashmir region in 1999, was awarded the highest military honour — Nishan-e-Haider — for his bravery during the Kargil war.

The PTM, a social movement for Pashtun human rights, based in Khyber Pakhtunkhwa and Balochistan, was originally started in 2014 as the "Mehsud Tahafuz Movement" as an initiative for removing land mines from Waziristan (especially the areas inhabited by the Mahsud tribes) and other parts of the erstwhile Federally Administered Tribal Areas, affected by the war in North-West Pakistan.

The movement rose to prominence in January 2018 when it began a justice movement for Naqeebullah Mehsud, who was killed extrajudicially during a police encounter in Karachi that same month. After gaining popularity among the Pashtuns in January, its name was changed from the "Mehsud Tahafuz Movement" to the "Pashtun Tahafuz Movement" (Pashtun Protection Movement).

Manzoor Pashteen leads the group, which has been accused of inciting hatred and racial violence amongst the different ethnicities in Pakistan.

In response to the group's criticism of the Pakistan military, Major General Asif Ghafoor, Director-General of the Inter-Services Public Relations (ISPR), said that he met Manzoor Pashteen and Mohsin Dawar and arranged their meeting with army officials.

During the meeting, Asif Ghafoor assured the group that their demands were genuine and would be looked into. Dawar even sent a text message to the army leader, thanking him for the facilitation.

However after the meeting, the army official was quoted saying," "After that, how did Manzoor Pashteen's name change from Manzoor Ahmed Mehsud to Manzoor Pashteen? How did this campaign start on social media, and how were 5,000 social media accounts set up in a single day in Afghanistan?" "How did one cap made abroad started being imported into Pakistan? And how did groups of 10 individuals started raising anti-Pakistan slogans? How did articles start appearing in newspapers and how did some foreign media start telecasting their protests live on Facebook and Twitter?" he asked rhetorically.

He said it was time that the PTM conducted some introspection. "When those who are the enemies of Pakistan start praising you ... then one needs to look inside and see if what they are doing is something favourable for the country or not," he said.