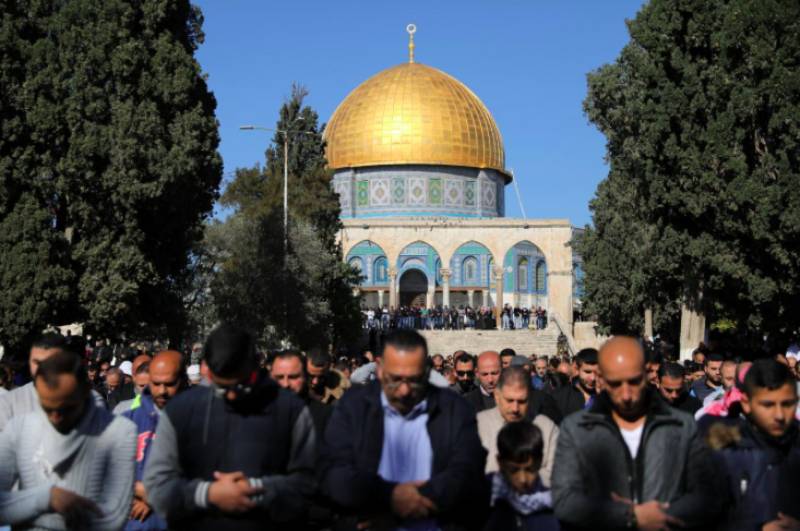 In 2005, Turkey’s Recep Tayyip Erdogan helped Pakistan and Israel establish their first public diplomatic contact. On Sept. 1, 2005, then foreign ministers Khurshid Kasuri and Silvan Shalom held several quiet meetings in Istanbul and showed up for a handshake in front of cameras.

The meeting capped a long record of informal contacts between the Jewish state and one of the largest Islamic republics. Twelve years later, Pakistan remains interested in tempering Israel’s involvement in India’s military buildup, a buildup that is largely Pakistan-centric. And Israel wants to ensure that the only Muslim nuclear-armed state stays away from Israel’s antagonists in the region.

So, how does Trump’s declaration on Jerusalem impact these objectives of both Pakistan and Israel?

A detailed examination of President Trump’s statement of Dec. 6, and ambassador Nikki Haley’s statement at the UNSC on December 8 shows that Washington is almost back to the original policy of not changing Jerusalem’s boundaries, and that the first impressions after Trump’s statement may not be accurate. This confirms what many analysts see as Trump basically making the Jerusalem announcement for domestic reasons, despite the damage it causes to American standing in the Middle East. One of the best commentaries on this aspect of Trump’s declaration came from an American-Muslim analyst Hussein Ibish writing for The National in UAE.

But the impression that Washington was recognizing the entire city of Jerusalem as the capital of Israel, instead of just West Jerusalem, has inflamed passions on the Arab and Muslim street and pushed moderate governments into a corner. Most of these governments hold moderate views on the city, recognizing UN resolutions that call for making Jerusalem the shared capital of two states, with East Jerusalem going to Palestine and West Jerusalem to Israel. The Muslim, Christian and Jewish places would be run according to a procedure that would be settled in the final negotiations.

This is the essence of the Pakistani position on Jerusalem explained by the Ministry of Foreign Affairs in a statement issued Dec. 7.

What all of this means is this: most Arab and Muslim countries, including Pakistan, were ready to meet Israel halfway, pending the establishment of a viable Palestinian state. But President Trump’s statement, with its initial inflammatory effect, has made this job difficult and pushed moderate Muslim governments into a corner. After all, governments across the region have been weakened by extremist movements and the war against terror. The last thing they need is public pressure accusing them of not doing enough to protect Jerusalem, home to Islam’s third holiest site.

Besides increased public pressure, Trump’s statement could embolden extremist groups in the region, like Hamas, Al-Qaida, ISIS, Hezbollah and Houthis. These groups have pounced on the opportunity to salvage their flailing fortunes. Interestingly, Jewish extremists have also received a boost from the Trump statement, just like their Muslim counterparts, weakening moderate Israelis.

But all is not lost. There are a couple of silver linings in the fallout from Trump statement. One is the renewed boost that the cause of Palestinian State with East Jerusalem as capital has received internationally. This issue was on the backburner and nearly forgotten. Trump inadvertently revived it. The other good thing to come out of this mess is the mature popular reactions across the Arab and Islamic landscape. With the understandable exception of Palestinian territories, almost all protest was nonviolent. Most Arabs and Muslims chose to express indignation through electronic and social media and peaceful street protest. The turnout was lower than expected. In Iran, turnout remained low despite official announcements by organizations like the IRGC urging people to come out in anti-US protests. The region has seen violent street protests on similar occasions in the not so distant past. The same is true for the Hamas stronghold in Gaza. Jerusalem is, of course, an exception.

The low turnout does not diminish the inflamed emotions on Jerusalem across the region. It only signifies a change in attitudes toward public displays of indignation, and possibly indicates a level of popular distrust in groups behind these protest calls. Generally, most groups prone to organize violent street protests are busy in multiple battles in Libya, Sinai, Yemen, Syria, Iraq, and Afghanistan. Groups like Hezbollah are stretched out, forced to pursue the agendas of their state sponsors than to focus on Israel.