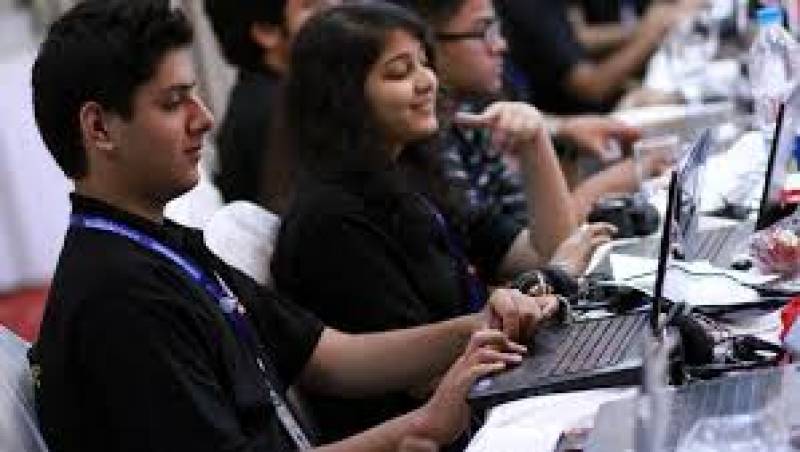 UNDP’s meticulous, comprehensive and expectant report encompassing almost all the aspects related to the youth of Pakistan is not less than a feat. The team’s hard and tireless efforts behind this extraordinarily drafted outcome are evident in the final version of the report. Seldom is the collected data expressed in a way that is easy to understand by the laymen.

The optimistic and auspicious tone of the report coupled with figures elaborating the prevalent conditions, hopes and needs of the contemporary youth serve best to grasp the interest of the reader. It’s also a portrayal of in-depth understanding of the subject of Dr. Adil Najam, Dr. Faisal Bari and their team.

“If you were to computationally condense the just under 60 million young Pakistanis between the ages of 15 and 29 into a statistically representative 100 young people” says Dr. Adil Najam. Only 30 of out of 100 are literate and 29 -aged 15 or above- didn’t even have access to school. 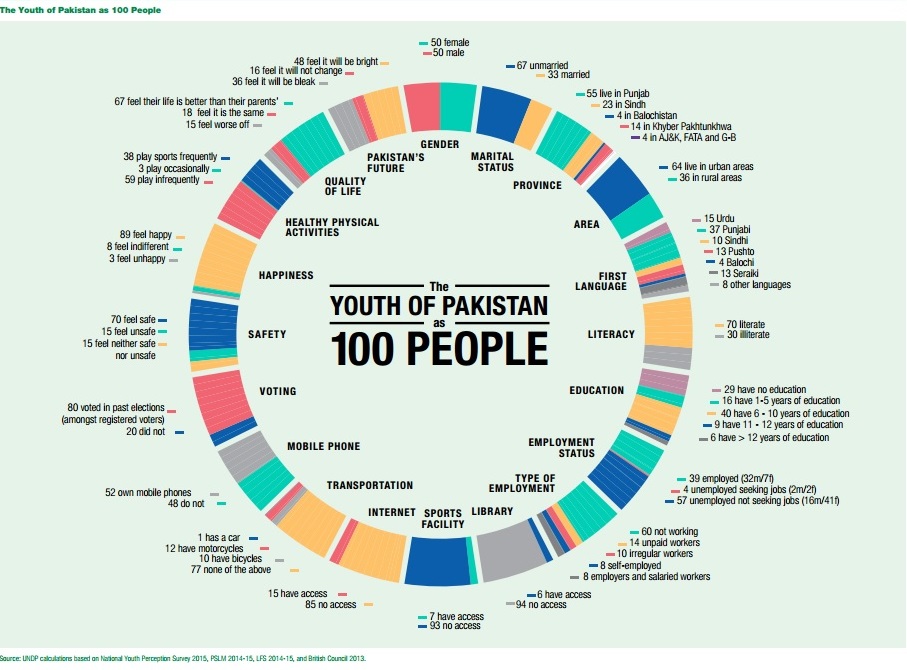 The greatest concern is female segment and underprivileged areas of the country: gender discrimination, religious misinterpretations and traditional orthodoxies have hurt the development process by depriving of the girls’ from education and employment. Similarly, lack of interest in areas like Balochistan and FATA has damaged the efforts of progress.

The epicenter of development and sustainability- in Pakistan has been the most underrated subject. The stats in the report depict a gloomy picture: out of 100 young people, only 15 kids reach the education level above 10th grade and 29 do not even go to schools.

The failure in educating the youth ultimately fails the nation.

That is not all: the stats are ample to prove the discrimination and marginalization on gender, social and linguistic levels. As a result, 9.45 million primary level kids are outside the schools and report claims that ‘Pakistan has one of the world’s lowest completion rates for primary education.’ 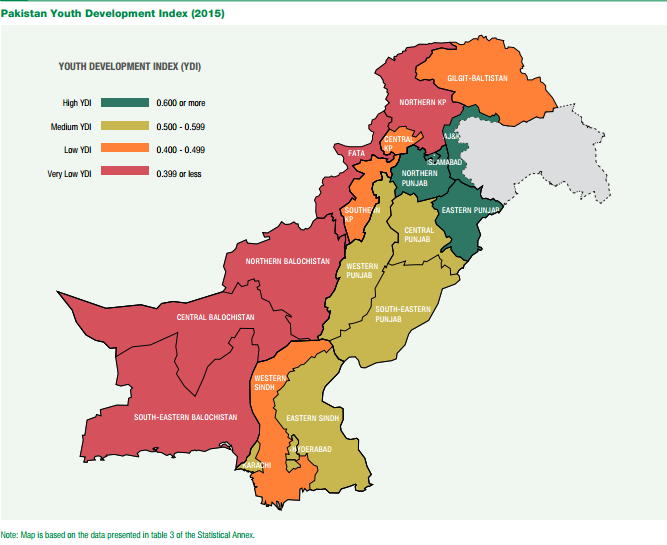 The gulf between Islamabad and Fata or Balochistan is a result of diverse measurable and immeasurable factors: budget allocation, the socially underrated populace, absence of government’s writ, rigid religious hooks and warfare, of course.

Pakistan’s budgetary allocation on education is only 2.3 percent of GDP which, according to The National Education Policy 2009, should have been seven percent of GDP by 2015. On the global scale, our country is the 15th lowest education spender.

Adding insult to the injury: the greater part of the allocated budget goes to salaries leaving almost nothing to be spent on teachers’ training, curriculum development and infrastructure.

‘The weakest entity in Pakistan’s education system is the higher secondary colleges,” the report rightly says. The lack of finances and effective monitoring mechanism leads to poor infrastructure. Untrained teacher have failed to bring innovation and their dependency on dogmatic methodology doesn’t prepare the kids for higher education.

Consequently, country’s enrollment rate is much lower than required: it will take at least 6 decades if we kept crawling at 0.92% enrolment rate. Only and only a growth rate of 3.8 percent annually lands us on the required zero out-of-school children in 2030.

Pakistani youth’s employment level is woefully low. According to the report, out of hundred, 39 are employed, 4 seeking jobs and 57 are neither employed nor seeking any jobs. These numbers pretty much disclose the path which our country is following: unemployed youth can be manipulated and misused easily. Before going into the details of dangers posed by the unemployed youth, let’s have a look at the employment level of female part of our youth which is 50 percent. Only 7 females are employed and 2 are seeking a decent job. It means out of 50 females 43 girls are unemployed.

In a country where people already in a job are not paid the salaries, creating 1.2 million to 1.5 million jobs each year for next 20 years seems unfathomable. Pakistan’s economy requires a boost, as according to The Economist, Pakistan’s foreign reserves in March 2018 were only $15 Billion. 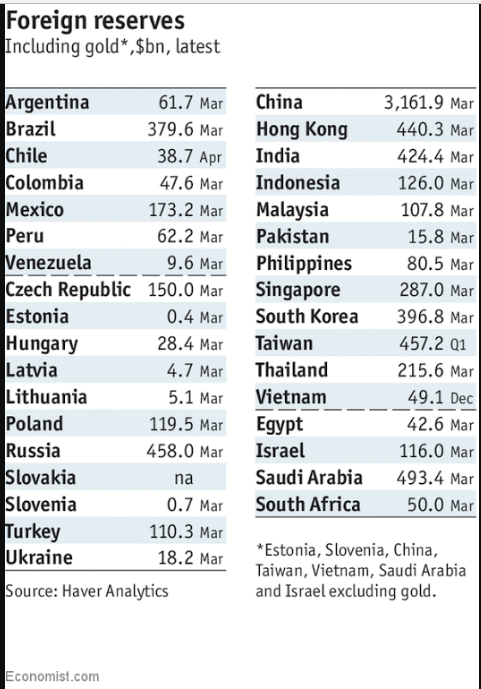 Is Pakistan en route to meet the SDGs? The answer is evident in the findings of the report: firstly, we are yet to localize the SDGs though the human capital of the country puts it on a launching pad ideal to accomplish the goals, secondly, the capital resources, policies and intentions portray that meeting the global goals within the given period seems beyond possibilities.

If Pakistan is to meet the SDGs, well-planned and target-oriented efforts are needed. The role of women must be redefined for the prevalent all-round participation of women is one of the major hindrances. To achieve the success, the female segment of society must be treated on equal levels. We must realize that women can change the society therefore the first priority should be empowering and integrating women in the economic process.

The positive uses of the internet to educate and engage our youth is missing. Unfortunately, the social media is misused by the influential in Pakistan where young people are hired on PKR 10000 to PKR 15000 just to crush the image of their opponent. And in this process, our youth forgets its identity, might and creativity.

Pakistan is young today and being young means full of energy, hope, willingness and innovation. Let’s utilize this human capital without any bias and vested interest instead of wasting this golden opportunity.

Let’s make our youth realize that they aren’t a problem but they are the leaders who hold the key to success. Why don’t we involve these youngsters in decision-making? They must have a role in consultation, as they are the solution to our issues. Online education is serving best to fulfill the gray areas throughout the world. Why can’t we bring it in our education system? It will be a great help to educate the dropouts also.

An all-inclusive policy instead of focusing on certain areas and leaving the rest unattended will help the country meet the SDGs. Youth’s engagement in consultation and decision making in inevitable for 60 percent of the population will define the path to success. The public-private partnership has the potential to pave the path to entrepreneurship.