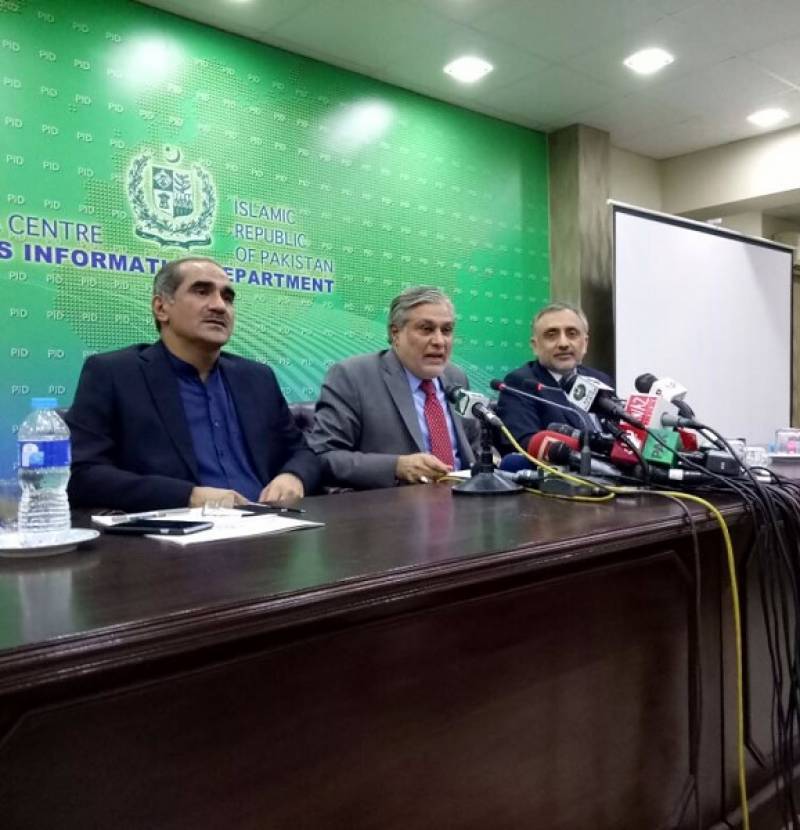 ISLAMABAD - Senior PML-N ministers on Tuesday addressed a press conference in an effort to counter the rising political pressure on the bigwigs of the ruling party.

Finance Minister Ishaq Dar opened the press conference with a suggestion for the Supreme Court to exercise restraint, apparently with regard to contempt of court proceedings against a local publication and notice of speeches made by PML-N ministers seen to be criticising the judiciary.

"Yesterday, the Supreme Court took notice of what is being said in the media about the case. Everyone should show patience like we have. The JIT report is not final," he said.

Finance Minister Ishaq Dar says the JIT investigation report on Panama Papers case contains many gaps and flaws, which will soon be challenged in the Supreme Court.

He was addressing a joint news conference along with Railways Minister Khawaja Saad Rafique and Special Assistant to Prime Minister Barrister Zafarullah Khan in Islamabad this evening.

Ishaq Dar said the PML-N legal team is reviewing the report, and the response will be submitted to the court with arguments and evidence. He said many documents included in the report do not contain any signatures.

He said a narrative is trying to be built since the report was submitted to the court. He said patience should be observed till the decision, and the democratic process should be allowed to be continued.

Ishaq Dar rejected as baseless the allegations leveled against him about his finance matters. He said all the record of his tax returns and financial matters is available, and will be presented to the court.

Speaking on the occasion, Khawaja Saad Rafique said the allegations levelled by the JIT will be replied to in Supreme Court.

He said JIT did not ask any question about the documents submitted to the court. He said the JIT acted partially, and its report is based on ill-intentions.

The Minister termed the JIT report part of a conspiracy against the government. He said PTI Chief whose party received foreign funding is playing the key role in the conspiracy.

Barrister Zafarulla Khan said the JIT report is being presented as a decision. He said there is a great difference between a court decision and an investigation report.