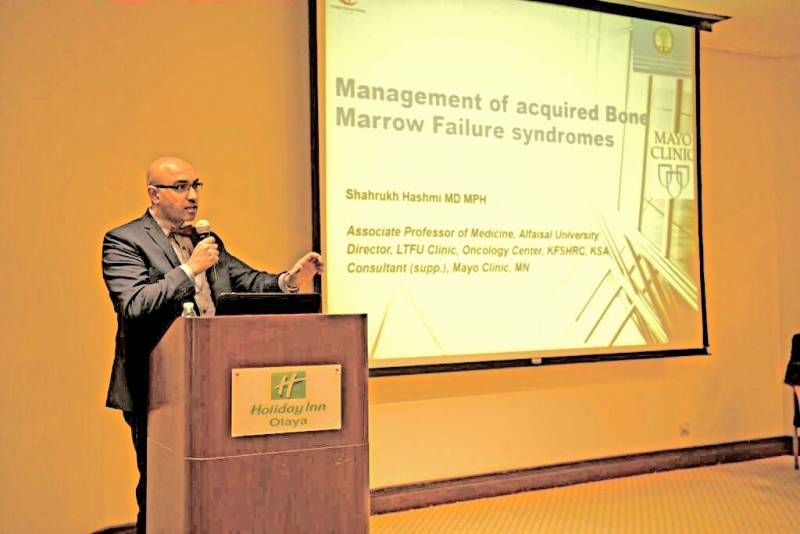 The very academic theme was “New Trends in the Approach and Management of Thrombocytopenia.” two renowned consultant Haematologists from King Faisal Specialist Hospital & Research Centre (KFSH&RC), Dr Marwan Shaheen and Dr Shahrukh Hashmi made absorbing presentations that formed the centrepiece for the evening followed by lively question and answer sessions.

Chief Transformation Officer, KFSH&RC, Dr Hassan El-Solh was the chief guest, an enormously accomplished haematologist, academic and administrator in his own right with over 100 publications to his name. He gave an overview of how vision 2030 was set to transform his institution, thus making high-quality tertiary level healthcare more widely available to the general population.

Dr El-Solh also captured hearts when he spent some time reflecting upon how Saudi and Pakistani doctors had worked together over many decades to both inaugurate new and substantially improve existing health services in the Kingdom. For this, he received a well-deserved and spontaneous standing ovation from all the men and women present.

His Excellency, Mr Raja Ali Ejaz, Ambassador Islamic Republic of Pakistan and PDGR patron newly arrived from his previous New York posting, also gave great accolades to his fellow countrymen and women. He noted their competence and high ethical standards when discharging their professional responsibilities, something he had observed in the USA and UK too, home to tens of thousands of Pakistani doctors.

PDGR President, Dr AsadUllah Roomi, Consultant Cardiologist, Prince Sultan Cardiac Centre rounded off the evening with a vote of thanks. He praised the moderators, PDGR academic secretaries 1 and 2, Dr Tazeem Hussain, Internal Medicine Consultant, King Saud Medical City and Dr Shad Ahmed, Haematology Consultant, KFSH&RC, together with the executive body as a whole for a well organized and well-received event.

A concluding prayer was delivered for the health and welfare of The Custodian of The Two Holy Mosques, King Salman bin Abdul Aziz and Crown Prince Mohammed bin Salman, all present wished them fortitude in enacting their benevolent vision for the Kingdom of Saudi Arabia.