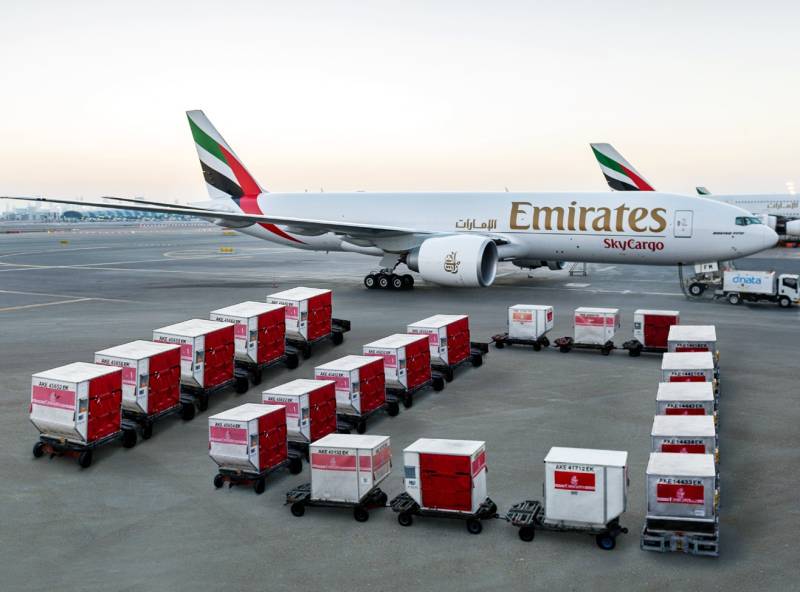 KARACHI - Emirates SkyCargo, the freight division of Emirates, crossed an important milestone and set a new record by transporting more than 81,000 tonnes of exports and imports to Pakistan in 2019. Operating in Pakistan since 1985, Emirates SkyCargo has been a facilitator of the country’s trade, connecting businesses and markets to over 155 destinations across over 80 countries in six continents.

“Emirates is a facilitator of trade and tourism in the countries and cities we serve across our route network,” said Mohammad Sarhan, Emirates’ Vice President Pakistan. “Emirates SkyCargo helps Pakistan’s local growers, traders, businesses and industries reach customers who are eager for the country’s products and services across six continents. Our wide-body fleet, network, tailored products and services, and focus on safety ensure that traders and businesses enjoy efficiencies and speed to market. Pakistan is a very important market for our cargo business.”

Despite challenges with a slowdown in the global air cargo industry, Emirates SkyCargo enjoyed a record-breaking year in Pakistan.

Using its extensive network and modern fleet to support local farmers, traders and industry, the cargo division exported over 65,700 tonnes of cargo from Pakistan worldwide and helped import more than 15,500 tonnes.

Emirates SkyCargo surpassed all previous records of mango exports from Pakistan, having facilitated the export of over 8,710 tonnes in 2019.

Over 26.1 million mangoes of different varieties were transported by Emirates SkyCargowith the three biggest markets being the United Kingdom, Europe and the Middle East.

When it comes to non-perishable exports, Emirates SkyCargo transported more than 19,000 tonnes of garments/textile, over 6,000 tonnes of courier packages, and more than 1,000 tonnes each of leather goods, surgical instruments and sports goods during the year.

Emirates SkyCargo offers close to 1,500 tonnes of cargo capacity every week from five cities in Pakistan, including Karachi, Lahore, Islamabad, Peshawar and Sialkot. With its combination of a modern, all wide-body fleet of over 270 aircraft, including 11 freighters, global network and multiple flight frequencies to major destinations across the world, Emirates SkyCargo ensures some of the fastest travel times for cargo transported to and from Pakistan.

Emirates SkyCargo’s specialised products for industry verticals, including pharmaceuticals and perishables, ensure the highest levels of safety, reliability and expertise. A specialised solution called Emirates Fresh ensures fresh fruits, vegetables and other produce retain their freshness during the journey from origin to destination. The product is supported with innovative equipment such as Cool Dollies to make sure that cargo is not exposed to temperature changes during loading or unloading from the aircraft, or while being transported to and from the terminal. Emirates SkyCargo White Covers on perishable shipments provide robust first-level protection against thermal fluctuations.

The cargo division has received several accolades during the past few years – including the prestigious ‘Best Airline - Flown as Booked’ award from the Air Cargo Agents Association of Pakistan (ACAAP) in recognition of their services to Pakistani exporters. It has also won several other major global awards in 2019, consolidating its leadership in the global air cargo industry.