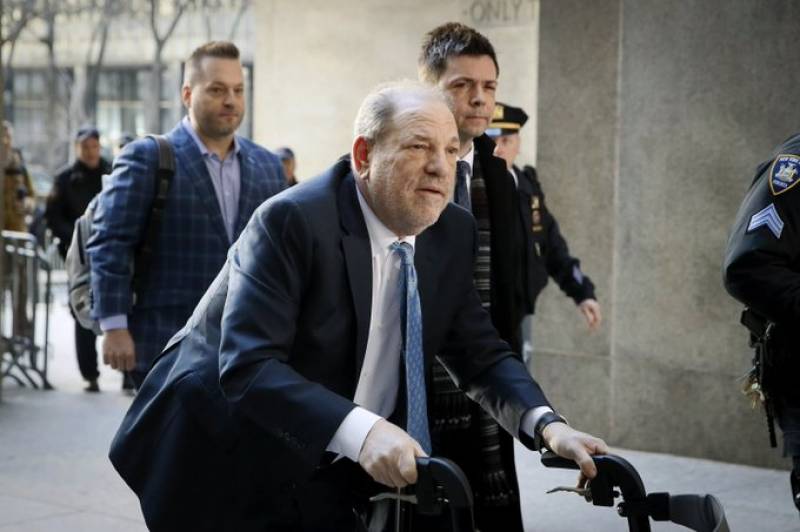 Judge James Burke issued the punishment in Manhattan Supreme Court, the UPI reported on Wednesday. Weinstein was given 20 years on a conviction of committing a criminal sexual act and three years for the other charge of third-degree rape. He was also ordered to register as a sex offender.

Weinstein, 67, was convicted on both counts last month. The jury, however, acquitted him on more serious counts of predatory assault. He still must face similar charges in Los Angeles.

The Academy Award-winning producer and onetime powerful film mogul was convicted stemming from two cases, in 2006 and 2013 involving two women. Multiple other women testified against Weinstein at his trial for prosecutors, who aimed to demonstrate a pattern of sexual misconduct.

Thank you to the #SilenceBreakers for their courage in embracing their truth. Standing in solidarity with all of you today. https://t.co/wUtMShdbGG

The two women at the center of the case gave victim impact statements Wednesday before sentencing. Accuser Tarale Wulff, who testified for prosecutors at trial but wasn't able to make an impact statement in court, instead posted hers online Tuesday.

"Harvey Weinstein stole a part of my self-worth, treating me like I was nothing and I became fearful and mistrustful, not only of others but of myself," Wulff wrote. "These feelings were unbearable to live with and I pushed back the fear, shame and guilt to move on with my life. That is how I survive."

The case against Weinstein was a landmark event for the #MeToo movement -- as it sparked the campaign more than two years ago and subsequently encouraged victims of sexual abuse and harassment to speak out around the world. Since then. a number of Hollywood figures have been accused of misconduct.

Nearly 90 women, including Angelina Jolie and Salma Hayek, have come forward alleging 40 years of vile predatory behavior by the Oscar-winning producer of "Shakespeare in Love" and numerous other critical and box office hits.

The Silence Breakers - a group of 24 Weinstein accusers that includes Ashley Judd, Lauren Sivan, Rosanna Arquette and Rose McGowan - said in a statement circulated to US entertainment media Weinstein's legacy would always be that he was a convicted rapist.