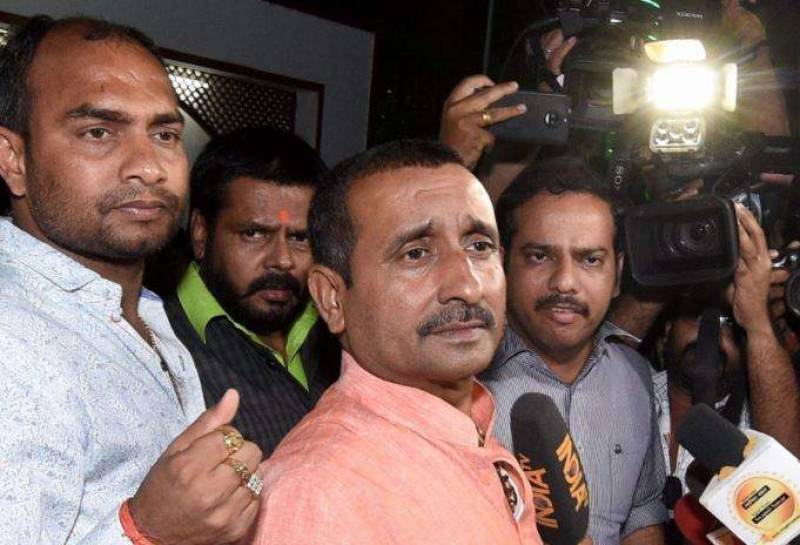 LUCKNOW - One of the lawmakers of India's ruling Bharatiya Janata Party has been charged with raping a 16-year-old girl from Uttar Pradesh's Unnao city, giving a reputational blow to the Narendra Modi led regime.

Kuldeep Singh Sengar has been charged under provisions of the Protection of Children from Sexual Offences Act (POCSO) after the Uttar Pradesh government ordered the police to file a case against him and hand over all cases related to it to the Central Bureau of Investigation.

The 50-year-old was nabbed after a special investigation team found that the police and doctors in Unnao had not performed necessary actions after the rape incident.

The victim had been trying to enlist the support of police since June last year but her hopes dashed on Sunday and she reached CM Yogi Adityanath's residence to commit suicide.

The girl also alleged that her 55-year-old father was thrashed by the lawmaker's brother Atul Singh and arrested by the police because he did not withdraw the case.

In a video, the girl pleaded that the said lawmaker was still at large adding that the accused should be hanged till death.

Kuldeep Singh (Sengar) isn't being arrested. I don't know if his brother is arrested. I demand that they be hanged till death. They've made my life miserable. I want justice. They killed my father: Woman who has leveled rape allegations against BJP MLA Kuldeep Singh Sengar #Unnao pic.twitter.com/fHJBcjrj52

Tragically, her father died on Monday, triggering massive outrage against the police following which Atul Singh was finally arrested on Tuesday, however, Kuldeep Singh Sengar was as brazen as ever an on Wednesday night, he showed up at the residence of Lucknow city's top police officer in a convoy of 20 vehicles, NDTV reported.

The lawmaker also boasted that he was neither a fugitive nor a rapist and had come here because TV channels were saying he will surrender, however, his appearance backfired and Yogi Adityanath government distanced itself from the ruling party lawmaker and announced the CBI probe.

The special team headed by Additional Director General of Police (Lucknow zone) visited Makhi village from where the rape victim hailed and collected information to submit a report to the state government.