Decline Of Drama Industry In Pakistan: 'PTV is closing its production houses' 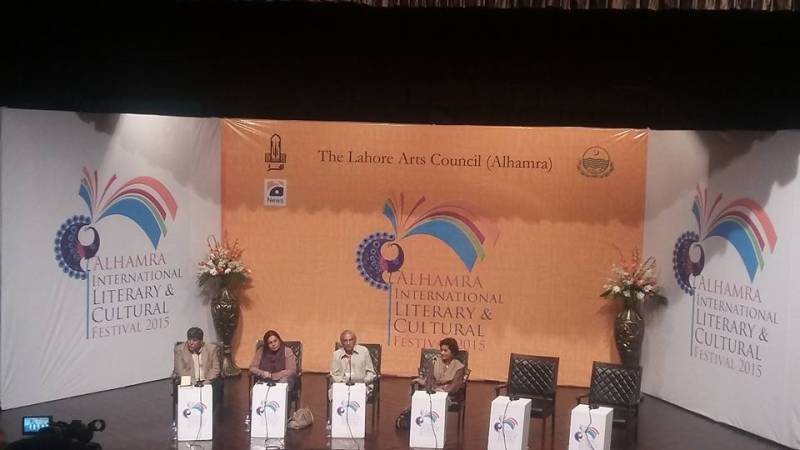 LAHORE (Ali Zain) - Although Pakistan Television Network (PTV) is globally accepted as foster school of Pakistani drama industry but seemingly the recent boom of private TV channels and increasing commercialisation has badly affected it because the renowned drama writer Noorul Huda Shah has revealed that PTV was shutting down its several production houses and instead it had started purchasing already-aired 'popular' drama serials from private TV channels.

Addressing a session at Alhamra International Literary and Cultural Festival 2015 on Saturday, Shah went on to say that Pakistan's iconic drama industry was on the verge of total destruction as writers were being asked to write something that could make good business instead of cultivating positive ideas in the society.

She said that young writers were getting very small share of earning being made by TV channels or producers and that was why only the TV owners, the Saiths, were getting richer and richer but the writers, who were actually the creators of dramas, were living unprivileged lives.

"I have stopped writing dramas due to current deteriorating situation of drama industry and likewise many other senior writers have also given up," she added.

Speaking on the occasion Asghar Nadeem Syed, who is himself a writer and heads a committee established for welfare of writers and poets, said it was true that recent commercialisation had badly affected the drama writers and TV channels were asking the writers to write something they could sell easily but still there were few good people in the field.

"Recently owner of a private TV channel had snubbed an investor/producer in front of me after he invited me to discuss an idea of Drama and the producer tried to dictate me a story which he thought could make a good business," he told audience.

However he said that everyday the number of unemployed writers was increasing because the current commercialised TV industry was not ready to own them.

Recalling the golden drama era of PTV the senior columnist and writer Munno Bhai said that today's private channels demand writers to write 'popular' stories while at the time of PTV stories were well written and they became popular afterwards.

When asked that a recent Pakistani film 'Jawani Phir Nahi Ani' was full of vulgarity even then how was it successful in making a business of millions of rupees in Pakistan, Munno Bhai said "they could earn even more money if they had bared their bodies a little more."

Veteran drama writer Hassina Moeen said that only writers could stop the current decline of drama industry by stopping writing such content for the TV channels. The wages that young writers were getting from private TV channels were very low and they could earn this much even by teaching at some school, she added.

She further stated that government functionaries and senior writers should demand the TV channels to dedicate at least one hour of their transmissions to quality drama content in which commercialisation would not be allowed to rule the content.

The three-day international festival is set to end on Sunday where fifteen literary and cultural sessions will be held including two debates specially dedicated to famous poet Faiz Ahmad Faiz and legendary maestro Nusrat Fateh Ali Khan and another to Radio Pakistan.