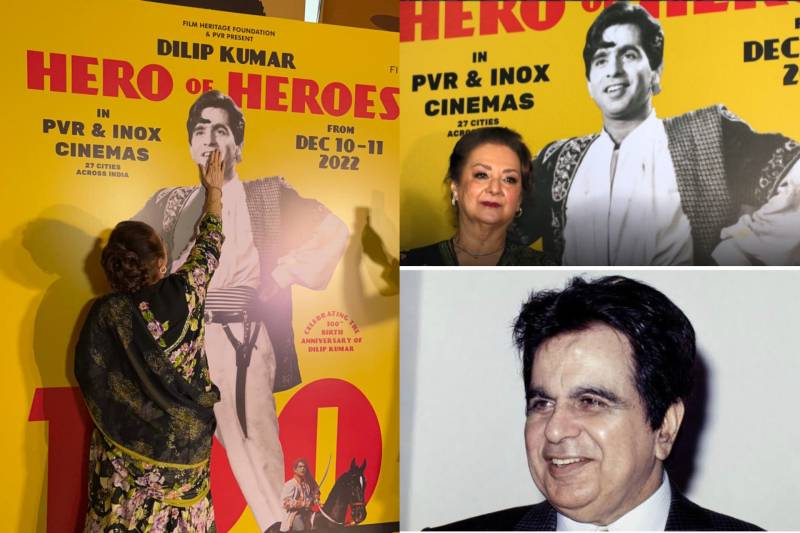 With the late legendary Bollywood actor Dilip Kumar’s 100th birth anniversary around, the iconic actor's fans haven't forgotten him at all. The celebrated actor's widow, Saira Bano, got emotional during an event organised to pay homage to Kumar.

Kumar passed away on Jul 7, 2021 at Hinduja Hospital in Mumbai at the age of 98 after a prolonged illness as he was suffering from several age-related issues, in addition to testicular cancer and pleural effusion.

In a video that surfaced on social media, Saira can be seen caressing the poster of the late actor while trying to hold back her tears. Banu was seen in a black traditional outfit and stood beside Farida Jalal and others.

The film pioneer is survived by his 76-year-old wife, Saira Banu - a popular Bollywood star back in the 1960s and 1970s. Dilip Kumar, whose birth name was Yusuf Khan, was born in December 1922 in Peshawar [pre partition era] to Ayesha Begum and Lala Ghulam Sarwar Khan.

Khan chose the name Dilip Kumar [a Hindu name] following his colleagues at that time and debuted in Jwar Bhata in the year 1944. The debut film failed to garner much attention and three years later, with the movie Jugnu, which also starred Noor Jehan, he clinched his first box office hit.

Kumar is listed in the Guinness World Records for winning the maximum number of awards by an Indian actor and was also honored with the top Indian civilian awards including Dadasaheb Phalke Award in 1994 and Padma Vibhushan in 2015. The tragedy King was last seen in Qila film the year 1998.