Chaos continues in Indian-held Kashmir as toll climbs to 32, over 400 injured 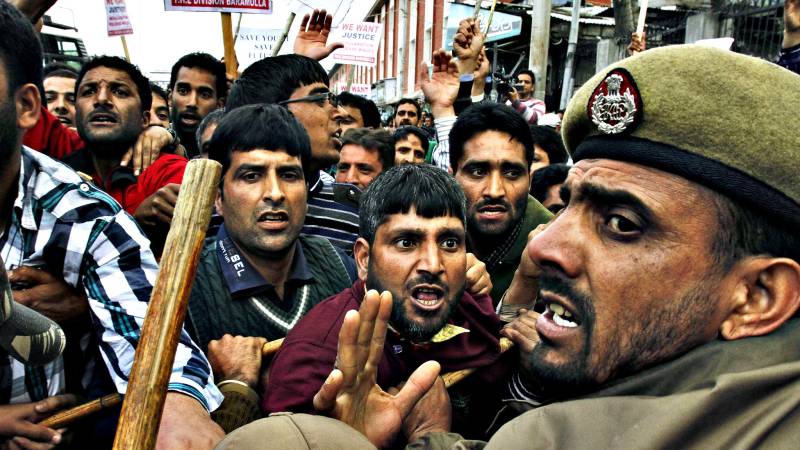 Thirty-two people have so far died and over four hundred have been injured in clashes during the protest, in which many unarmed protesters were fired on by Indian security forces. Hundreds of others have also been arrested.

People ignoring the Indian government's curfew restrictions are continuing their protest in Srinagar and other towns in the occupied territory.

Paramilitary troops and police are patrolling villages and towns of the valley. Businesses are closed and cell phone service have also been suspended.

Chairman All-Parties Hurriyet Conference, Syed Ali Gilani, Mirwaiz Umar Farooq and Muhammad Yasin Malik, in a joint statement, have called for an extension of the strike by another two days, starting from on Tuesday.

During a regular briefing in New York, UN Secretary-General Ban Ki-Moon expressed concern over the situation developing in Indian-occupied Kashmir.

Condemning the brutalities of Indian forces, Pakistan Foreign Office Spokesman Nafees Zakaria said that Kashmiris were struggling for their right to self-determination through a peaceful and indigenous freedom movement.

He urged the United Nations and the world community to play their role in resolving the longstanding Kashmir issue according to aspirations of the Kashmiri people and UN resolutions.

Nafees Zakaria said Kashmiris wanted an end to the oppressive Indian occupation and an opportunity to decide their own fate by holding a plebiscite under the supervision of the United Nations.

In a statement, he urged New Delhi to respect human rights in Indian-occupied Kashmir and fulfill its commitment to hold a plebiscite in Kashmir to decide whether the people want to align with either Pakistan or India.

Wani, a 22-year-old commander of Kashmir’s largest pro-freedom militant group Hizbul Mujahideen (HM), was killed along with two others during a brief gun battle with government forces.

He joined the HM group at the age of just 15 and was viewed as a hero by many in Kashmir. The state’s former chief minister Omar Abdullah tweeted after his death that he had become the “new icon of Kashmir’s disaffected.”

Witnesses said tens of thousands attended his funeral on Saturday despite the curfew, chanting independence slogans and firing pistol shots in his honor.

HM is one of the several groups that for decades has been actively fighting against the half a million Indian troops deployed in the region.