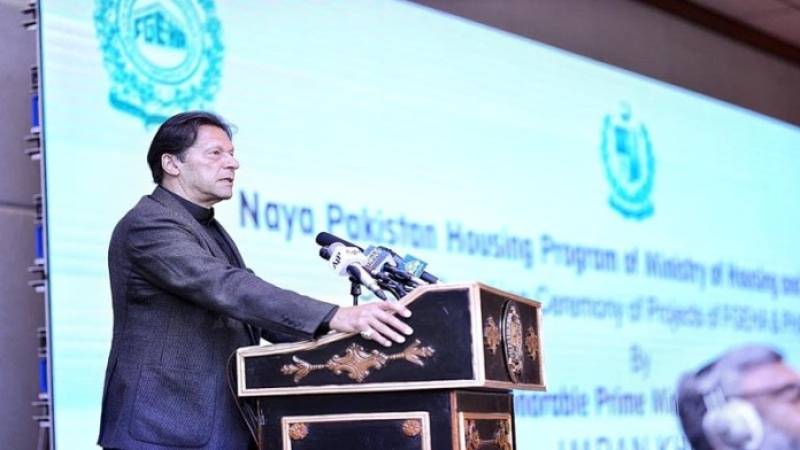 ISLAMABAD - Prime Minister Imran Khan has made another move to revive the coronavirus-hit economy with an initiative to create a surge in the housing and construction sector with Rs 330 billion of mortgage financing by commercial banks in just 18 months.

The prime minister himself unveiled the plan for revival of the construction sector after the maiden meeting of the newly formed National Coordination Committee on Housing and Construction on Friday.

Commenting on the government’s initiative, a leading property developer and businessman Ejaz Gohar said it was the first plan, which would make it affordable for low and middle-income people to build houses with mortgage financing of as low as five to seven percent mark-up. The commercial banks would allocate five percent of their portfolio amounting to Rs 330 billion for the construction activities.

He noted that some Rs 20 trillion was circulating in the informal unregistered economy and now was the opportunity for the people to get the huge amount of money declared by investing in the real estate sector by December 31, 2020. Now a person with an income of Rs 30,000 to Rs 100,000 could build a house of 5-marla with the mortgage financing at 5 percent and that of 10-marla at 7 percent mark-up.

Ejaz said mortgage financing was started in the United States 82 years back to kick-start it's economy.

The government will give a subsidy of Rs 30 billion for the construction of houses. The prime minister has planned to hold meetings of the Coordination Committee on Housing every week to remove hurdles that come in the way as Pakistan is far behind in terms of home mortgage financing as compared to the developed world.

As happened all across the world, the coronavirus pandemic had contracted Pakistan’s economy as well and resulted in a rise in unemployment and economic difficulties for the common man so the government’s measures for the construction sector would be a much needed timely relief.

The coronavirus emerged as a deadly threat for the world at the start of 2020 and so far killed more than half a million people and ravaged the leading economies of the world, contracting world economic growth and completely closing down vital sectors like airline, travel and tourism industries.

Many economically strong countries like China, the United Kingdom, Italy and Spain were forced to impose strict lockdowns spread over months to stop the surging coronavirus.

However, economically fragile countries like Pakistan were caught in a dilemma as the option of complete lockdown was a recipe for disaster, especially for the vulnerable sections of society like daily wage earners and lower strata of society, who are a significant portion of population counting in tens of millions.

Prime Minister Imran Khan, known for his leadership qualities since his cricketing days, went for a policy of smart lockdown, balancing the need to halt the spread of coronavirus and keep the different sectors of the economy open at the same time.

The strategy largely worked and as of now the vital sectors of the economy are open and the economy is rolling along, with the number of coronavirus cases after hitting the peak are dipping on a daily basis. Now the number of recovered is more than that of the active COVID 19 patients in Pakistan. As many as 141,000 persons have defeated the virus.

In order to deal with the adverse effects of coronavirus, the government announced a relief package worth Rs 1.2 trillion on March 24, which was being implemented in the fiscal year 2020-21.

After undertaking of the infrastructure, road and energy projects across Pakistan in the first phase, the focus was shifted to the building of eight special economic zones and socioeconomic and human development with the Chinese financial assistance of $1 billion.

The Pakistan Tehreek-e-Insaf government established the CPEC Authority and appointed Lt General (Retd) Asim Saleem Bajwa which had a decisive impact as was evident from the progress on different projects undertaken under CPEC.

Asim Bajwa has set his sights on executing vital projects, including M8 motorway from Gwadar (Balochistan) to Ratodero (Sindh) and $ 230 million Gwadar international airport. The other projects include a fully fenced 1,800-kilometre-long railway track from Karachi to Peshawar, a dry port at Havelian and a new electricity transmission system to augment the ultimate plan of mass industrialisation and relocation of industries from China to Pakistan.

While giving a practical shape to the concept of Riyasat-e-Madina, Imran Khan launched his flagship Ehsaas programme to take care of the poor and needy.

This year the government allocated Rs 208 billion for different projects under the Ehsaas programme deftly managed by Dr Sania Nishtar, Special Assistant to the PM, gaining appreciation at international forums.

The government had distributed Rs 194 billion since April 9 under the Ehsaas Emergency Cash Transfer Programme after the coronavirus began spreading in the country. One time cash assistance of Rs 12,000 each was transferred to 12 million daily wage earners under the programme.

According to Minister for Information Senator Shibli Faraz, the cash assistance was distributed among the most deserving and vulnerable families without any political discrimination, during the first phase after imposition of the lockdown in the wake of coronavirus outbreak.

The government this week announced the second phase of the cash transfer programme realising that more urgent steps were needed to mitigate the sufferings of the poor adversely affected by the pandemic.

One of the hallmarks of the PTI government remains its austerity drive.

he incumbent Federal Government has reduced its wasteful expenditure saving hundreds of billions of rupees and examples of that are cut in the exorbitant spending of the Prime Minister’s house and office, a considerable reduction in the release of supplementary grants and discretionary funds and, end to the stuffing of government departments with jobs given without merit and on the basis of party affiliations.

Pakistan exists in a region which offers not only enormous opportunities but obviously presents its immense security challenges.

By continuing with the state’s well-defined policy of maintaining peace with all its neighbours, Prime Minister Imran Khan after assuming office offered talks to Indian Prime Minister Narendra Modi but the opportunity was missed as Modi went ahead on the path of Hindutva and continued with the mistreatment of Muslims and other minorities in his country and the Occupied Kashmir.

After India’s reckless move to revoke the special constitutional status of Jammu and Kashmir on August 5, 2019, Pakistan also further hardened its stance and steadfastly persisted with its support for the Kashmiris’ right of self-determination granted under numerous United Nations Security Council resolutions.

Prime Minister Imran Khan took a firm stand against the belligerence of Modi against the Muslims in India and Occupied Kashmir and united the nation on the Kashmir issue through a countrywide campaign. His address in the United Nations General Assembly set the tone of Pakistan on the decades-old festering issue.

His widely acknowledged speech made it abundantly clear to the world that without the resolution of Kashmir issue permanent peace between Pakistan and India will remain a mere dream and the region will be prone to a disastrous war as both the countries have nuclear weapons.

The PTI government successfully continued to engage its neighbours China, Afghanistan and Iran in meaningful and productive relationships in pursuit of the state’s strategic goals of regional peace, security and prosperity.

The government led by Prime Minister Imran Khan has an undeniable achievement in its two years and that is it has shaken the very foundations of decades-old political system reeking of corruption, misgovernance and incompetence.

The PTI government at its inception was beset with multiple challenges on the internal and external fronts after the country had witnessed an institutional collapse at different levels of governance due to the sheer incompetence and misgovernance of the previous governments led by two parties well entrenched in the political system.

The country was in a desperate need for resolute leadership and Prime Minister Imran Khan did not budge from his responsibility towards the nation and took the monumental challenges head-on.

He came into power on the slogan of combating corruption and mafias that had penetrated vital sectors of the economy. He went after the mafias and squeezed their space to operate with impunity.

Prime Minister Imran Khan inherited an unstable economy after winning elections in 2018 and then the coronavirus has reversed many of the advances made by his government on the economic front.

However, now the latest report released by the International Monetary Fund noted that a gradual economic recovery was expected in Pakistan in 2021 as different sectors of economy opened up after getting a severe jolt from the coronavirus.

Pakistan is a country blessed with immense natural beauty seen in the world’s highest snow-capped mountains, lush green valleys and meadows, and fast-flowing rivers traversing its landscape with origins in high altitude north. This beauty is further magnified with its vast plains, forests, deserts and beaches in its south along the Arabian coast. So the country has a huge potential to boost its tourism.

In the last two years as Pakistan regained its peace after defeating terrorism and insurgency, tourism flourished and tourist flow increased by a mammoth 300 percent. The government made it easy for foreign tourists to visit by launching online visa services for 175 countries and nationals of 50 countries were offered visa on arrival.

With the relaxed visa requirements and improved security environment, Pakistan attracted 6.6 million visitors to its tourist attractions in 2019. Many prestigious international travel magazines ranked Pakistan as one of the top travel and adventure destinations for 2020 before the coronavirus put everything to stop.

But behind this success story and trajectory of Pakistan’s stability and growth lies riveting tales of blood, sweat and tears as Pakistan’s armed forces valiantly defeated insurgency and terrorism in more than a decade long campaign predominantly on its western borders to restore peace and bring back the sense of security to its citizens.

Alongside an army determined to keep peace and protect the country’s vital interests, Prime Minister Imran Khan with his trademark resolve trudges on to navigate a path towards Naya Pakistan which ensures economic opportunities and overall prosperity for every citizen and keep at bay elements responsible for the financial and institutional mess triggered because of their shortsightedness and opportunism for short political gains