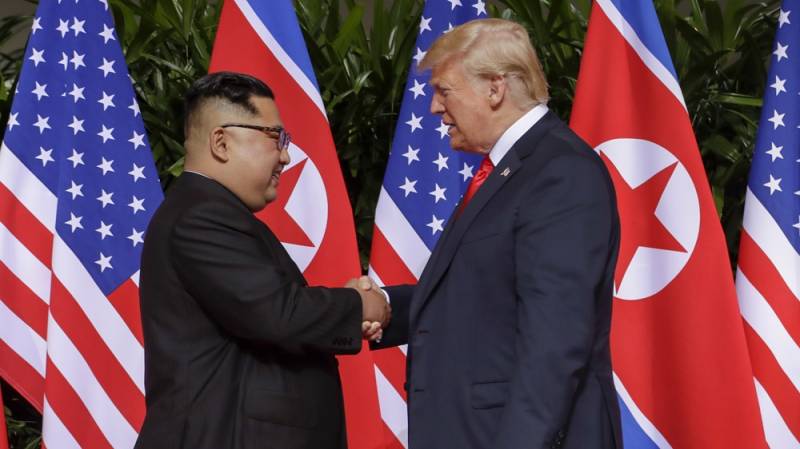 In an unprecedented development, US President  Donald Trump and North Korean leader  Kim Jong-un met on Tuesday at a landmark summit in Singapore after a year of war threats.

The two leaders shook hands at a luxury hotel on Singapore's Sentosa island before heading to talks. Posing for photos while shaking hands with Kim, US President said, "we will have a terrific relationship no doubt".

Kim said "the way to come here was not easy. The old prejudices and practices worked as obstacles on our way forward, but we overcame all of them and we are here today."

The pair also signed an agreement in which, according to international media, North Korea has reaffirmed its commitment to the denuclearization of Korean Peninsula.

The document promises "new... relations" between Washington and Pyongyang while it makes no mention of US demands for "complete, verifiable and irreversible denuclearisation".

Earlier, Trump and Kim held a one-on-one meeting, which lasted about 48 minutes, as both top guns emerged from the meeting room, Trump expressed that the talks were "very, very good" and that he and Kim have an "excellent relationship".

.@POTUS and Leader Kim Jong Un on balcony after finishing the one on one. #SingaporeSummit pic.twitter.com/kRiDpRiEq6

Later, the two leaders headed to an expanded bilateral meeting, where they are joined by key advisers of their respective countries.

After reaching the delegation-level meeting place, the North Korean leader said we can expect "the dawn of peace" now that the "unhelpful past" has been left behind.

From Threats to Handshake

The meeting would have been unthinkable last year when tensions escalated between the two countries after North Korea came into action to develop a nuclear-tipped missile capable of targetting the United States.

Trump had vowed to prevent that happening and threatened North Korea with “fire and fury like the world has never seen”. He mocked Kim as “little rocket man” on a suicide mission.

Kim denounced the US president as the “mentally deranged US dotard” who would be “tamed ... with fire”.

President Donald Trump said that the United States will stop holding joint military exercises on the Korean peninsula, making a major concession to North Korea after his summit with Kim Jong Un.

“We will be stopping the war games which will save us a tremendous amount of money. I think it's very provocative,” he said.

“Under the circumstances, we are negotiating a complete deal,” he added.

The move, if fulfilled, would appear to be effectively an implementation of the “freeze for freeze” proposal promoted by China, under which the North would stop nuclear and missile tests in exchange for a halt to the exercises, which had riled Pyongyang.

The two leaders touched down the venue for the much-anticipated summit on Sunday within hours of each other. They will meet at 9am in Sentosa on Tuesday to discuss the issues and find a mutually acceptable way out.

The two leaders are expected to address the complete denuclearisation of the peninsula and possibly made an announcement ending the nearly seven-decade-long Korean War, international media reported.

Trump, on his trip to the island country, expressed positive feeling in a tweet. He wrote, “Great to be in Singapore, excitement in the air!”.

Expressing views of the unlikely geopolitical role, Singapore Prime Minister Lee Hsien Loong said, “From our point of view, it’s important that the meeting takes place, and that the meeting sets developments on a new trajectory – one that will be conducive to the security and stability of the region”.

North Korea’s state media said on Monday that the two leaders will discuss a “permanent and durable peace-keeping mechanism” on the Korean peninsula, denuclearisation and other issues.

The editorial in Rodong Sinmun confirmed that Kim had travelled to Singapore to meet Trump, saying, “we will establish a new relationship to meet the changing demands of the new era”.

“Even if a country had a hostile relationship with us in the past, our attitude is that if this nation respects our autonomy… we shall seek normalisation through dialogue,” it reads.