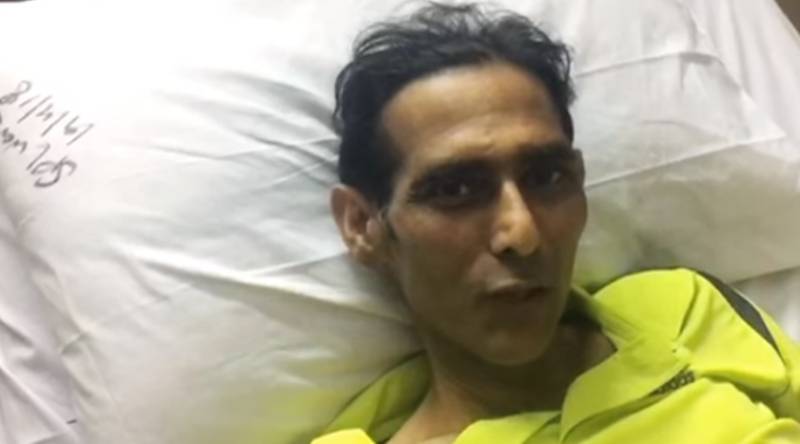 LAHORE - Mansoor Ahmed, one of the stalwarts of the Pakistan hockey, passed away Saturday in Karachi after a prolonged illness at the age of 49.

His health started deteriorating since the past few days, and he was put on life support earlier today at Institute of Cardiovascular Disease Karachi after his lungs and heart had stopped working well.

Ahmed, who was known as the 1994 World Cup hero for Pakistan, had been suffering from the heart-related disease for the past three years.

"Hockey legend," "hero," and "best hockey goalkeeper" are some of the description Twitteratis used for the deceased player as condolence poured in over the great loss.

Saddened to hear about the death of our legend Mansoor Ahmed. Hero of World Cup 1994. May ALLAH bless his soul with peace and give enough strength to his family and friends to cope with this huge loss.
Inna lillahi wa inna ilayhi raji'un.

My heart goes out to the family of our legend Mansoor Ahmed on his demise. May Allah give him the highest place in Jannat and make it easy on the family #RIPMansoorAhmed

Deeply saddened on hearing the news of the demise of Hockey Legend, Mansoor Ahmad. May Allah SWT grant him the highest ranks and give his family sabr, Ameen. Today the Nation mourns a true hero.

Pakistan’s legendary goalkeeper Mansoor Ahmed has passed away. He was instrumental for 🇵🇰 as we won the 1994 Hockey World Cup.

Look at the Save of Legend Mansoor Ahmed in the Semi Final of 1994 Hockey World Cup which helped Pakistan in reaching the Final in the End And He Saved a Stroke in Final As well ... pic.twitter.com/czsZtlUiOv

Hockey hero Mansoor Ahmed is no more, whistle blew on his life...... his heart, which needed a push... a heart transplant to give him EXTRA TIME ... in his life failed this afternoon. The match of his life is over.. A vibrant, outspoken, friendly soul..... may he rest in peace.

Last month, the hockey legend aspired to go to neighbouring India for a surgery where the health facilities were much better according to the player.

He had reached out to the Indian government for a visa so that he could get the needed treatment, however, doctors in Pakistan have said that the former goalkeeper could be treated in the country.