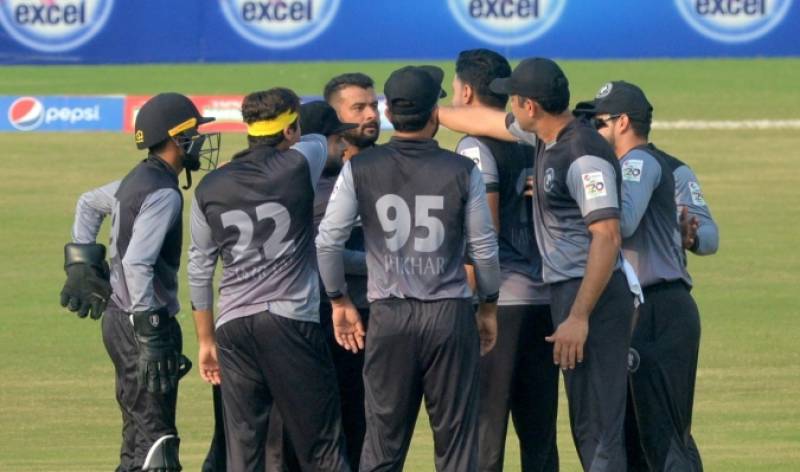 LAHORE – A steady half-century from Sahibzada Farhan and a destructive 45 not out – at a staggering strike rate of 265 – will see Khyber Pakhtunkhwa defend their title in the final on Wednesday as they fashioned a five-wicket win over Northern in the first semi-final of the National T20 2021-22.

Defending 50 off last five, Northern had an impressive start to the death phase of the run chase as Zaman Khan leaked mere four singles and dismissed Nabi Gul in the 16th over. The next over, delivered by experienced T20 bowler Sohail Tanvir, gave away only six runs.

It was the 18th over when Iftikhar Ahmed decided to take the charge with his side 40 runs away. The Khyber Pakhtunkhwa captain smashed Zaman for two sixes in an over, which added 17 runs to the total.

The match was settled in the penultimate over, as the right-hander, who had struck a thunderous 26-ball 54 not out last night against the same opposition in the final group-match, smoked Salman Irshad for three fours and a gigantic six over mid-wicket to leave only one run for the final over, which Khalid Usman overhauled with a towering six on the first ball.

Iftikhar spanked four fours and three sixes in the innings. In this tournament, he has smashed 22 sixes – the most by any batter – and has a strike rate of 164, which is the best for the batters with more than 200 runs.

It was Sahibzada Farhan’s third half-century of the tournament that had laid the foundation for the successful overhauling of 157. The right-handed opener – who is also the leading run-getter in the tournament with 421 at an average of 42.10 – led the 57-run alliance with fellow opener Musadiq Ahmed (seven off 15) before the latter handed an easy catch on the penultimate ball of the eighth over.

Farhan started his innings by smashing Sohail for three boundaries in the opening over. Northern, however, did well to tame the pair for the next five overs in which Farhan and Musadiq could add only 26 runs.

Farhan brought up his half-century the next ball after Musadiq’s dismissal as he caressed Anwar Jamal for a four through extra cover. He clubbed seven fours and a six in his 39-ball stay, over which he scored 53, before he holed out to long-on off Nauman Ali, who once again was the most economical bowler from his side with one for 17 off four overs.

Kamran Ghulam, who smashed a brilliant 110 not out last night, made 29-ball 35, studded with six fours.

Like Nauman, all other fours bowlers – Sohail, Zaman, Salman and Aamer Jamal – picked up a wicket each.

Iftikhar’s call to insert Northern paid dividends as despite a solid 48-run alliance for the first wicket between Nasir Nawaz (27 off 18) and Ali Imran (run-a-ball 24), the Umar Amin-captained side put 156 for eight on board.

The dismissal of Nasir – first ball after powerplay – off Khalid Usman broke the momentum and a caught and bowled by Iftikhar in the next over – that curtailed Ali’s stay at the crease – aggravated the situation.

A 44-run stand between Umar (22 off 18) and Zeeshan Malik (29 off 21) promised to put the Northern innings back on track, but their dismissals in span of six balls – the former getting caught off Imran Khan Snr and the latter getting run out – left the batting side four down at 104 with 5.5 overs remaining.

There were a few fireworks towards the end of the innings with Sohail spanking two sixes, but Khyber Pakhtunkhwa’s Arshad Iqbal soon made his presence felt by dismissing Sohail, Aamer Jamal and Nauman Ali.

The right-arm pacer returned three for 35.

Khyber Pakhtunkhwa will face the winners of the second semi-final between Home City Central Punjab and GFS Sindh.

On Monday, Northern handed a humiliating defeat by KP after the batting and bowling lineup failed to perform in the 30th match of the National T20 Cup.

All Northern players were removed at 115 while chasing the huge target. Rohail Nazir remained the top scorer with 35 runs while most of the players could score below 10.

LAHORE – Northern were handed a humiliating defeat by Khyber Pakhtunkhwa after former’s batting and bowling ...

On the other hand, Sindh paved their way to the semifinals by defeating Balochistan in the 29th match of the National T20 Cup.