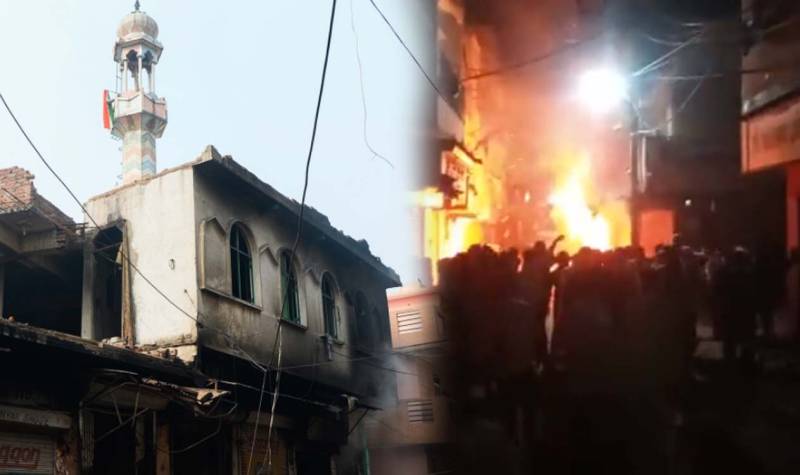 NEW DELHI – Right-wing groups attacked Muslims while a mosque was vandalized and properties owned by Muslims were ransacked and later bulldozed during the Hindu festival of Ram Navmi in India.

Reports in international media suggest that dozens of processions were taken out in parts of India to celebrate Ram Navami, a festival that celebrates the birthday of the Hindu deity, while many of these mass gatherings attempted to disrupt peace and communal harmony in Muslims dominated regions.

Reports said a Ram Navami procession started with a music system playing religious songs stridently while it was time for the Muslims to offer prayers. As the procession crossed a mosque, a clash erupted between groups.

Flames from a Mosque in Khargone. The camera moves for a second, and one can see policeman silently watching. pic.twitter.com/BdEqZJenbF

In viral clips, processions of Hindu groups can be seen wielding sticks and swords, playing provoking tracks laced with threats of genocide outside homes and mosques, and raising hate slogans.

The worst incident of organized violence was reported in the district of Khargone in the central state of Madhya Pradesh, where a mob of Hindutva-inspired ideology torched several vehicles and a garage in a city area, cops said, while nearly 100 people have been arrested.

Hindu gang members set fire to a mosque in the city while law enforcers remained mute spectators. Nearly 10 houses were also torched and more than 24 people, including a police officer, were injured in the violence.

Amid the violence, the provincial government razed homes and shops belonging to Muslims, saying the premises belonged to those who had thrown stones during the procession.

The fear of the rise of Modi-led BJP is palpable among Muslim community, which has faced increased attacks and political marginalisation across South Asian country since the Hindu nationalist party came to power at the centre.