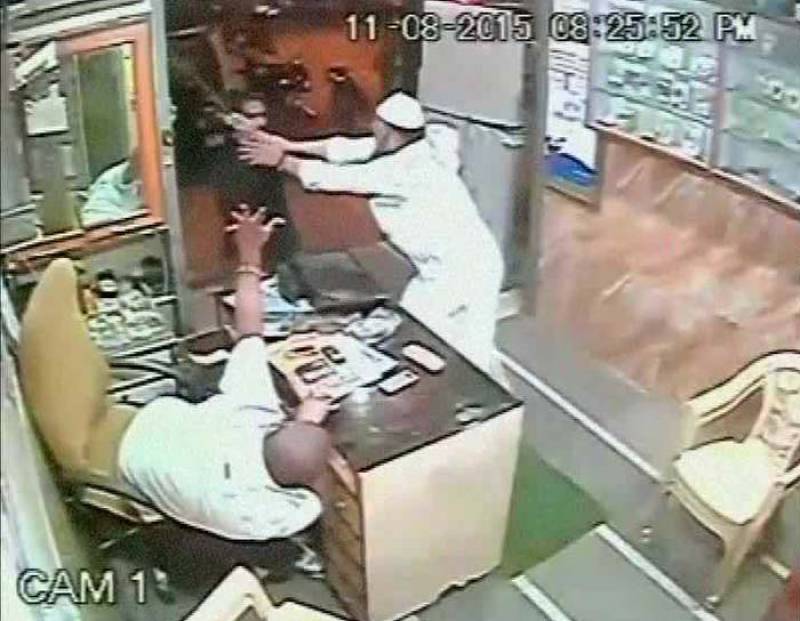 MUMBAI (Web Desk) - In a spine-chilling incident that occurred in Mumbai late Tuesday night, a shop owner was attacked for raising his voice against some druggies, who used to extort money from shopkeepers on the threat of arson, Indian media reported.

Rajnish suffered injuries to the neck, left hand and waist and is in the ICU. Four people have been arrested so far. Police is in search of two other suspects.

According to full detail, on Tuesday night, a group of six men pulled up to Mr Thakur's shop, which sells mobile phones, determined to exact revenge because he had put up posters in May in the Chembur area warning that extortionists were threatening shop owners to make regular payments of Rs.1,000 to them. Anyone who didn't fall in line was warned that his or her shop could be set on fire, the posters said. Mr Thakur asked people to contact him or his brother with information on the thugs.

Mid-day.com reports that though some of the extortionists were arrested, they were released after paying a fine.

Security cameras show one attacker entering the shop with the sword hidden behind his back. He then slashed Mr Thakur twice, injuring his hand and neck before a customer overpowered him. The five other gang-members in the car outside drove away, NDTV reported.

"We are so grateful to the Muslim friend (customer) who saved life of Hindu. Otherwise he would have been hacked to death. The police did act initially but then they dropped it," the victim's brother Manish Thakur said.