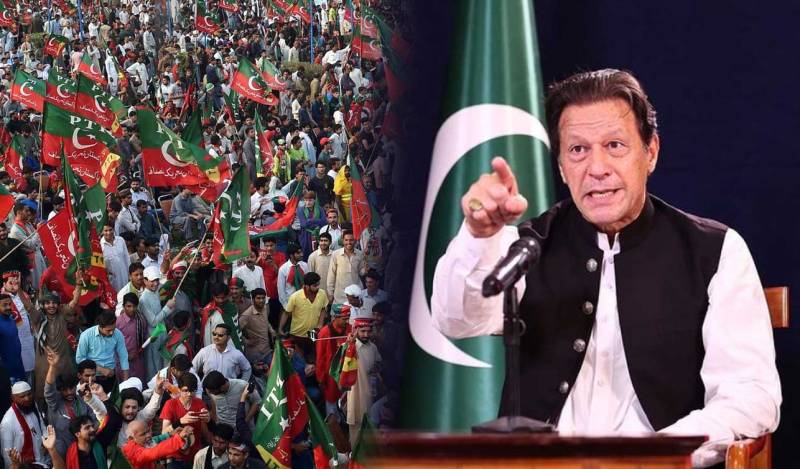 LAHORE – Ousted prime minister Imran Khan said on Saturday the "imported government" was trying to spread fear by arresting members of his party, Pakistan Tehreek-e-Insaf (PTI), and subjecting them to torture in violation of the law.

Addressing his party's ‘Haqeeqi Azadi Jalsa’ at the National Hockey Stadium in Lahore, Khan said the fight for real freedom would always be difficult, but he was hopeful that Pakistanis would not lose heart.

Clarifying a point, Khan said he was not anti-America, but he would not accept or ask people to accept American slavery. He said his Russia visit was aimed at buying cheap oil from President Vladimir Putin's government. He said that India was a free country therefore they rejected the US pressure and bought oil from Russia for the sake of Indian people.

He said that South Africa too refused to take US dictation on their national matters, but the imported government in Pakistan was trying its best to play an American slave.

Khan said the incumbent government led by Prime Minister Shehbaz Sharif subject PTI supporters to the worst torture when they were trying to join the anti-government march. He said that PTI supporters were taking part in a peaceful protest therefore subjecting them to torture was a violation of the law.

The PTI staged a grand power show in the Punjab capital on the eve of Pakistan's Independence Day.

PTI chief will also address the mass gathering, which will be telecast across Pakistan. A fireworks display and flag-hoisting ceremony will also be held at midnight to celebrate Independence Day.

Arrangements at the venue were completed while the roads leading to Lahore’s National Hockey Stadium have been decorated with the PTI flags.

More than 1,500 personnel were deployed for the security of the power show, vehicles were parked at a considerable distance and police teams ensured effective patrol around the hockey stadium.

PTI earlier planned to hold its rally at Parade Ground Islamabad but later changed its venue fearing to warn from the federal government.

This time, one of the biggest political parties of Pakistan picked a sports venue, the National Hockey Stadium, for the political gathering and the turf of the stadium was being removed under directions from the Chief Minister Pervez Elahi-led government.