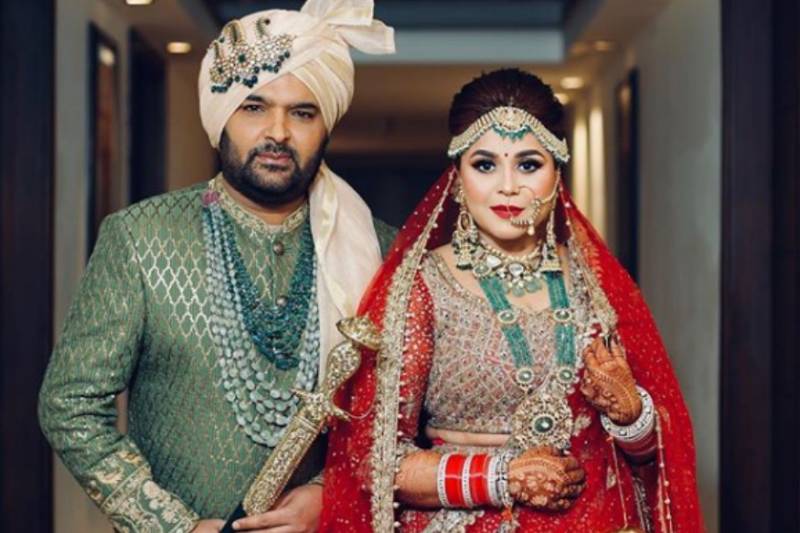 On Wednesday (yesterday), Kapil Sharma tied the knot with his longtime girlfriend Ginni Chatrath in Jalandhar, India. The comedian shared a photo after the ceremony on his social media accounts.

Within moments, friends and fans showered the newlywed couple with love and blessings. Sunil Grover also took to  Twitter and congratulated Kapil. He tweeted, “Wishing @KapilSharmaK9 and @ChatrathGinni a happy married life. May God give you happiness and togetherness always. Best wishes.”

The Bride and Groom chose traditional Indian attire for their wedding:

Kapil sported a green sherwani, with string adding some drama to his look. His triple kalgi on the turban and sword grabbed attention, as did his bearded look.

Kapil also broadcasted his wedding live on his YouTube channel Kapil Sharma K9. Before the grand wedding, pre-wedding ceremonies like Mehendi, sangeet and Mata ki chowki were held in Amritsar. Celebrities like Bharti, Krushna and Sumona uploaded the images from these ceremonies.

It is said that Kapil Sharma and Ginni Chatrath will host a wedding reception in Amritsar on December 14.

Here, wishing a blessed life to the newlyweds.