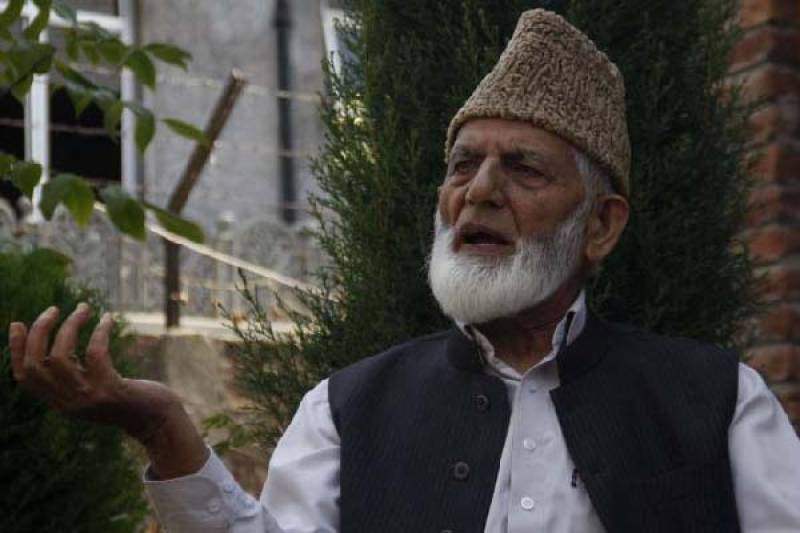 SRINAGAR - The Chairman of All Parties Hurriyet Conference, Syed Ali Gilani in occupied Kashmir has said that young Kashmiris participating in widespread protests are influenced by the Hurriyet ideology of resistance

against Indian occupation of the territory.

Syed Ali Gilani in an interview at his residence in Srinagar said, the Kashmiri youth are politically more aware as well as sensitive and they are facing brutal Indian forces fearlessly,Kashmir Media Service reported.

“They have learnt it from us. We have influenced them. They follow our shutdown calls. But they are more determined,” he added.

The APHC Chairman said that pro-India elements were responsible for the bloodshed that had left 34 people dead and over 1500 injured in firing by Indian forces on protesters.

The ailing leader, who is under continued house arrest and suffers from multiple ailments, said that pro-India forces and the Indian government were responsible for creating Burhan Wanis.

“India shows no respect for humanity, fundamental rights of Kashmiris,” he added.

Syed Ali Gilani mocked at the puppet administration for asking the Hurriyet to restore peace in Kashmir, saying that it was the administration that had not allowed democratic forces to flourish in the territory.

“I am under house arrest since 2010. We are not allowed to meet people. India has unleashed a reign of terror,” he said.

The APHC Chairman pointed out that Indian Army, paramilitary and police personnel were shooting to kill protesters at will.

He asked the protesters to keep resisting and venting their anger but urged them not to forget moral and human values cherished by peace loving people of Kashmir.

“We should not harm Hindus, Sikhs and Christians. They are part of our culture and brotherhood. People visiting us as tourists from across the world should also not be harmed,” he added.