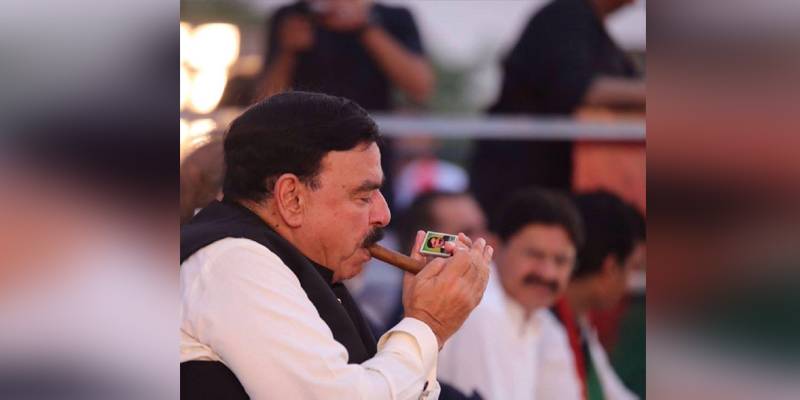 ISLAMABAD - Awami Muslim League (AML) chief Sheikh Rasheed Ahmed has been declared eligible to contest upcoming elections as the Supreme Court has announced its verdict in the disqualification case on Wednesday.

The judgment was announced with a majority of 2 to 1, with Justice Qazi Faez Esa giving a dissenting opinion that the full court should decide the question of law whether every mistake leads to disqualification or not.

The petition seeking disqualification of firebrand leader was filed by Pakistan Muslim League-Nawaz’s Shakeel Awan who lost the 2013 general election to Rasheed; the petition was dismissed by the apex court, paving way for Sheikh Rasheed to contest forthcoming polls.

Justice Azmat Saeed pronounced the short verdict in the presence of Sheikh Rasheed and a bevy of reporters, though no reputed figure from Paksitan Tehreek-e-Insaf turned up in the apex court. A detailed order in the case is yet to be issued.

Talking to newsmen after the verdict, AML supremo Sheikh Rasheed expressed that he and his assets belonged to Pindi adding that he did not conceal anything from the public eye.

The politician explained he wants to see the political future of those who were eyeing his political death, asserting that he would form a coalition government with Pakistan Tehreek-e-Insaf chief, Imran Khan.

The Pindidite did not miss the chance to heap scorn on former premier and claimed that he would have accepted an unfavourable decision as well, saying he was not Nawaz Sharif.

'I am a Pindi boy and my fortune belongs to my city Rawalpindi,' quipped the visibly satisfied political figure.

After the verdict, Shakeel, who happens to be a relative of PTI's Babr Awan shared that to secure justice, every legal door would be knocked upon.

He continued that the case was heard for 18 months in the election tribunal while the apex court reserved the verdict for 84 days.

'I pose complete trust in the courts,' said Awan.

The petition seeking the disqualification of AML chief was based on the alleged mis-declaration by Rasheed in his nomination papers.

During the hearing of the petition, Awan’s counsel had argued before the apex court that according to the Representation of People’s Act 1976 (ROPA), it was necessary to accurately declare all of one’s assets before contesting elections.

He also cited the recent court case regarding the wrong filling of nomination papers in the backdrop of Panama Papers judgment - a decision which sent former PM Nawaz Sharif packing.

At one point during the course of hearings, Justice Qazi Faez Isa had remarked that according to the petitioner, whatever the error, the lawmaker should be disqualified.

The question was whether a lawmaker stood disqualified if it was proved that he or she had committed an error while filling out the nomination papers or his/her assets, Justice Sheikh Azmat Saeed had observed.

Looking at the slew of recent decisions, it becomes obvious that Rasheed might face the axe of the apex court for 'concealing' or misdeclaration of assets, however, all eyes are on the Supreme Court for the much-awaited decision.