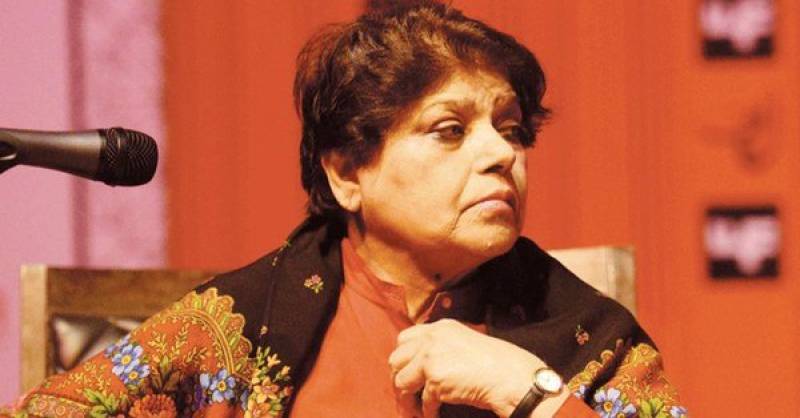 LAHORE - Kishwar Naheed is no new name to Pakistan. She is one of the first few women that come to mind when we speak of feminism. She has 12 volumes of her poetry published from both Pakistan and India. Her Urdu poetry has also been published in foreign languages all over the world. Her famous poem 'We Sinful Women', affectionately referred to as a women’s anthem among Pakistani feminists, gave its title to a groundbreaking anthology of contemporary Urdu feminist poetry, translated and edited by Rukhsana Ahmad and published in London by The Women's Press in 1991.

Naheed's comments on the Aurat March that took place on International Women's day last week were presented at the Sindh Aurat Tanzeem celebration of Women's Day. Naheed was vocal about the way slogans were put up at the march. She believes that values should not be forgotten while advocating for rights. She printed out various slogans that she did not approve of, such as, "Khana main garam karoongi, tum bistar khud garam karlo", "Lo baith gayi sahi se" and "Main awara hoon".

Check out her point of view here.

Twitter is exploding with responses against Naheed's statement as various people feel disappointed in her point of view keeping in mind that she is a feminist in fact.

Well there are all kinds of people who go to an extreme .. for example misandrists...what I'm saying is kishwar naheed is wrong in saying that's what #auratMarch stands for

Literally don't get why kishwar naheed won't want the same freedoms for ALL women.

'Tehzeeb' is used as an uncontested category when culture is one of the most common weapons used to silence women. The irony is that her poem, 'Yeh Gunahgar Auretein,' uses the same tanz that one of the 'offensive' posters she mentions does with its play on 'awara' women. (2/5)

O wow. I had recently started a book of hers, ironically 'buri aurat ki katha' don't feel like picking it it back up.

Yes, this was so disappointing.