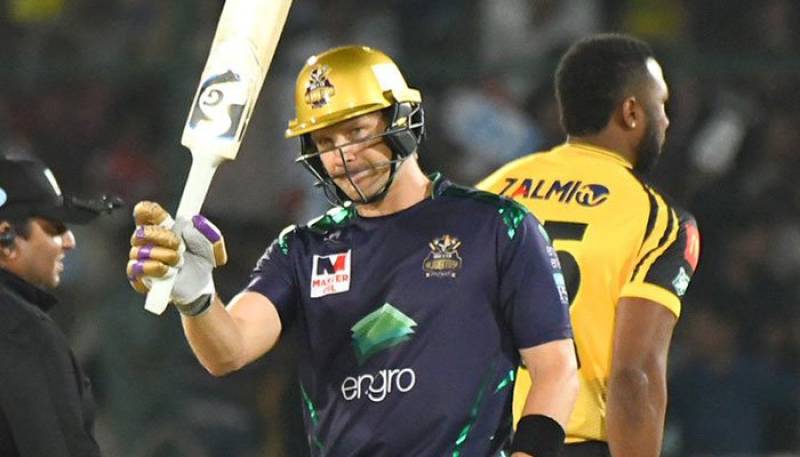 KARACHI - Peshawar Zalmi were defeated by Quetta Gladiators by 10 runs in a high-octane clash of Pakistan Super League 2019 at National Stadium Karachi on Wednesday.

Quetta Gladiators set a 187-run target for Peshawar Zalmi in the first qualifier of the Pakistan Super League, however, Zalmi were not able to clinch the target.

With the latest victory, Quetta Gladiators have reserved its place in final of the fourth edition of PSL.

Thursday's winner will meet the losing side from Wednesday's match between Quetta Gladiators and Peshawar Zalmi in Eliminator 2 on Friday, with the winner qualifying for the sell-out 17 March final.

A Shane Watson Show helped #PurpleForce post a good total of 186. Time for #YellowStorm to gun it down. We are up for an exciting game of cricket in second half.

What do you think, Kon Jeetay Ga?

A Shane Watson Show helped #PurpleForce post a good total of 186. Time for #YellowStorm to gun it down. We are up for an exciting game of cricket in second half.

What do you think, Kon Jeetay Ga?

Islamabad, winners in 2016 and 2018, were equal on points with their rivals in the league phase with 10 in as many games, finished ahead of Karachi on better net run-rate, said the information made available here on Wednesday.

They also have more balance in their batting and bowling, which earned them two wins against Karachi in this year's event.

On their way to the title in the first edition, Islamabad beat Karachi in the Eliminator by a convincing nine-wicket margin when Brad Haddin (52 not out) and Luke Ronchi (50 not out) help them chase down a modest target of 111 runs.

Back to Back SIXES! @ShaneRWatson33 goes big and clears the fence on both occasions

But, Karachi reversed the result in 2017 when the two teams again met in the Eliminator, beating Islamabad by 44 runs at the back of some superb bowling by Mohammad Amir, Imad Wasim and Usama Mir – all taking three wickets.

Islamabad again had the better of Karachi in the third edition on their way to the title, winning by eight wickets. Ronchi once again was Karachi's nemesis, by scoring a whirlwind 94.

In 2019, Islamabad proved a better batting and bowling unit as they beat Karachi by seven and five wickets, respectively in the two league matches, with Asif Ali benefiting from a dropped catch to plunder a match-winning 70 in Dubai, the 18th match of this season.

However, Islamabad captain Mohammad Sami feels it will be a new match on a new day.

In Shadab Khan and Samit Patel, Islamabad has two good spinners who can check the flow of runs and also claim crucial wickets.

Ronchi with 297 runs at a strike rate of 158.82 is Islamabad’s leading run-scorer (behind Shane Watson’s 352 and Colin Ingram 321) and always comes good against Karachi. Asif also poses danger in the middle-order as he can be effective in the slog overs.

Karachi is also shaping up well with time and before home fans. They had the better of Quetta in the last-ball thriller by one-run before going down to Peshawar in the last league game to finish fourth.

"We are looking forward to playing against Islamabad. We have had a lot of good battles against them and they have obviously won a lot of games against us," This time around, we think it's our time and we are hopeful to win this match," said Imad, who hopes fans come to support in big numbers.

"My message is to come and support us in the last two matches and we will not disappoint you," said Imad.

Karachi will hope Colin Ingram, Babar Azam (293 runs in 10 matches) and Liam Livingstone (291 runs) lift them to a good total and hope their spin-cum pace attack stops Islamabad. Left-arm spinner Umar Khan has been a revelation for Karachi, having taken 13 wickets in the league phase.

The pace attack comprising of Mohammad Amir (12 wickets) and Usman Shinwari (12) is also getting better results with each match.