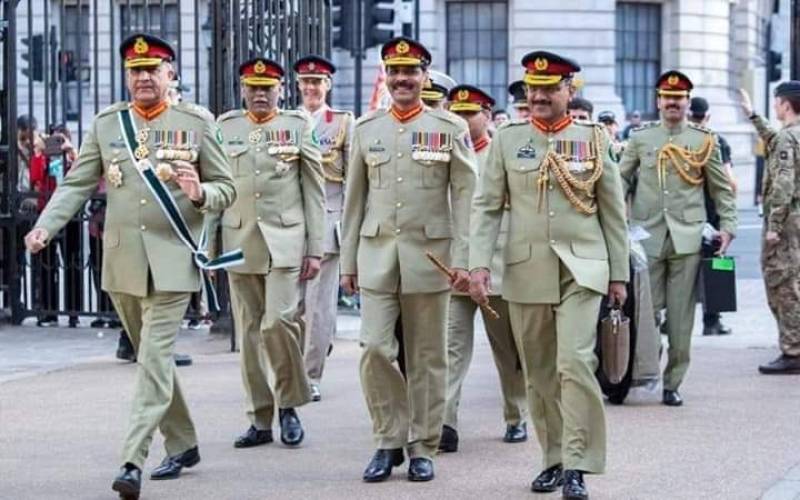 LONDON - Pakistan Army believes only democracy is the way forward and the country's armed forces have provided full support to democratic institutions, said the military spokesman on Saturday.

“We will work to make sure that democracy continues in Pakistan,” Major General Ghafoor, the Director General of Inter-Services Public Relations (ISPR), told reporters at the Pakistani high commission in the United Kingdom, where he is accompanying Chief of Army Staff General Bajwa on his visit to the European nation.

“Whenever the army chief talks to any foreign dignitary, we talk about Pakistan and not about the army,” he added.

The ISPR chief called on all institutions to stand by each other and work together. “Army always stands by institutions, not with individuals,” he said.

Interacted with Pakistani media at Pakistan High Commission, London. Candid discussion on various national security issues. Pakistani media abroad has a national responsibility to project positive narrative of Pakistan. Thanks to them for doing their bit. pic.twitter.com/cTCmY0XOvo

The general categorically stated that the surgical strike is a myth and India was running lies to discredit Pakistan. “We have the power to retaliate with 10 surgical strikes if a single adventure is carried out by our eastern neighbour. There should be no doubt about that,” he asserted.

He further said that the freedom movement of Kashmiris is indigenous and does not have external support. “Independence of Kashmir is in the DNA of Kashmiris, the movement for freedom is completely independent, India knows it well that there is no interference from Pakistan.

"Kashmiris are fighting for the war of their survival and India knows Kashmiris are right and they will win and the struggle of Kashmiris will be won by Kahsmiris. They are freedom fighters and not terrorists, India has used every kind of power to suppress Kashmiris but failed.”

Ghafoor ruled out any role in the vigorous anti-corruption drive in Pakistan, in a result of which many politicians including the former-PM Nawaz Sharif have been jailed.

“Army always stands by institutions, not with individuals.”

Success in the war against terrorism

Ghafoor also highlighted Pakistan’s success in the war against terrorism. “We are the only success story in the Muslim world in terms of what we have achieved. 76,000 people have laid down their lives for peace and stability in Pakistan."

He also stressed that every institution has to work within a policy parameter.

PTM issue wider and beyond any individual

The DG ISPR said that Pakistan has no issue with the Pashtun Tahafuz Movement (PTM) but there are concerns about the way it's operating and the message it is trying to portray to mislead Pakistanis.

He said that the PTM leader was a Pakistani who studied at an army school and at no point the army has said anything against him.

“The issue is wider and beyond any individual. Pakistan Army has made unprecedented sacrifices in FATA and other areas, coming to the area and clearing it of terrorists who had made these areas havens of terrorism against Pakistan. We cannot forget that it’s in these areas that Pakistanis and its armed forces were attacked and football played with the remains of the deceased. Where were all those people then when terror was being unleashed from these areas? There was no hue and cry then but now that we have made these areas safe and secure our enemies are doing their best to sow seeds of discord amongst Pakistanis. We understand that Manzoor Pashteen has no power to organise these protests abroad but we do know who is behind these protests and the sources of funding.”

2018 general elections were the most transparent and free

The DG ISPR said the 2018 general elections were the most transparent and free, with the Pakistan Army ensuring that people voted according to their will on polling day.

“There has been a record turnout in various parts of the country. Voters made their own choice and were not told who to vote for or not,” he added.

The military spokesman stressed that allegations of rigging had been made, but there was no evidence brought forward.

Major General Ghafoor said the PML-N government had listened to each and every demand of the Pakistan Army and provided funds for the fence on the porous border.

“The PML-N government approved the operation against militancy and fully cooperated. We cannot allow a porous border. The barricade is not meant to be a divide between the two countries.”

Role of the international media

The military spokesman further spoke on the role of the international media and how positive stories about Pakistan were not carried but negativity was highlighted.

“A case in point is reforms in FATA. We have not seen any objective story in the western press about this, but reports keep coming up on alleged human rights violations.”

The spokesman added that in Pakistan there was freedom of expression, but the media faced pressures related to the economy.