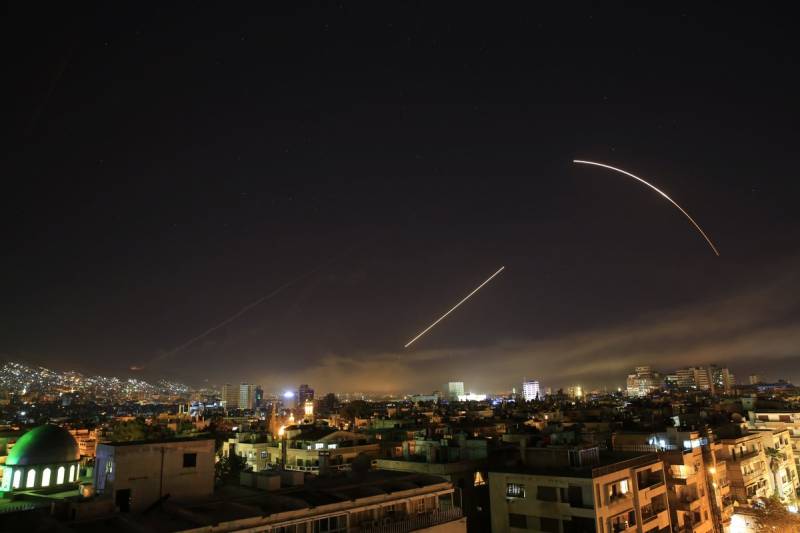 DAMASCUS - In what appears to be a harbinger of more tension in war-ravaged Syria, the United States, Britain and France carried out a wave of strikes against Bashar al-Assad's regime on Friday, drawing the ire of Russia.

The strikes were launched in response to alleged chemical weapons attacks that President Donald Trump labelled as "crimes of a monster" and  US Defence officials have said that both US ships and aircraft were used in the strikes.

At least six loud explosions were heard in Damascus at 4:00 am (0100 GMT), and smoke was billowing out of the specifically targeted sites amid Trump's short address in the White House.

The Syrian Observatory for Human Rights said a scientific research centre and military bases in Damascus were targeted, as were the Syrian army’s Republican Guard and 4th Division, elite units of the Syrian military.

Meanwhile, in his prime-time address, Trump confirmed that a short time ago, he had ordered the United States armed forces to launch precision strikes on targets associated with the chemical weapons capabilities of 'Syrian dictator' Bashar al-Assad.

"A combined operation with the armed forces of France and the United Kingdom is now underway. We thank them both," Trump added.

BREAKING: President Trump says US military is striking Syria with France and the UK pic.twitter.com/qanpzruhHS

"This massacre was a significant escalation in a pattern of chemical weapons use by that very terrible regime," he said while referring to the suspected gas attack a week ago on the suburb of Douma.

"The evil and the despicable attack left mother and fathers, infants and children thrashing in pain and gasping for air. These are not the actions of a man. They are crimes of a monster instead." he declared.

The tycoon-turned-president also warned Russia and Iran not to stand by their ally, Assad in Damascus.

"Russia must decide if it will continue down this dark path or if it will join with civilised nations as a force for stability and peace," he observed.

Besides Trump, French President Emanual Macron said in a  statement that they also could not tolerate the normalisation of the use of chemical weapons.

Third wave of US coalition bombing knocks the hell out of Military Targets in Damascus, Syria pic.twitter.com/kIEqobwHCF

Moreover, British Premier Theresa May expressed that they could not allow the use of chemical weapons to become normalized - within Syria, on the streets of the UK, or anywhere else in our world, referring to the nerve agent attack on double agent Sergei Skripal and his daughter.

Soon after the attacks, Defense Secretary James Mattis confirmed that they had no additional attacks planned, emphasizing that the strikes were directed at the Syrian regime and in conducting these strikes, allies had gone to great lengths to avoid civilian & foreign casualties.

He advocated that as far as the legal authority was considered, under the article 2 of the constitution, the president had every reason to defend the vital American interest and that is 'what he did here tonight under that authority'.

In a statement released on Twitter, Russia's ambassador to the U.S. said the country was being "threatened," and issued an ominous warning that reprisals could follow.