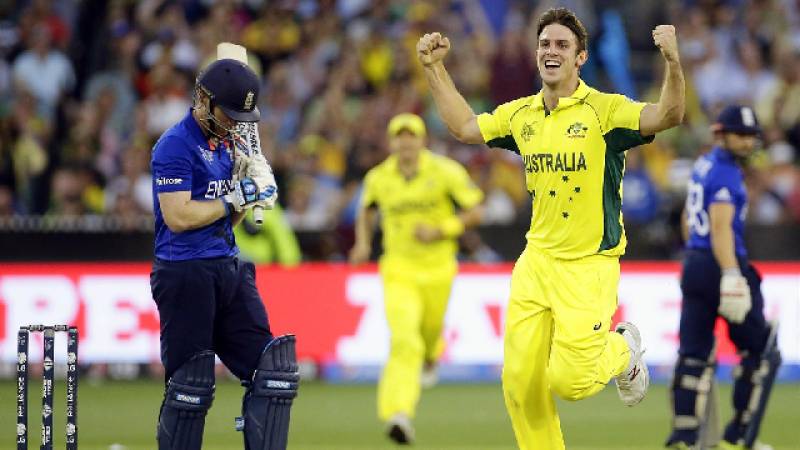 When the match started England skipper Morgan won the toss but put the Australians in to bat - a decision which backfired spectacularly as the hosts made 342-9, opener Aaron Finch leading the way with 135. Things would have been worse still for England if Steve Finn hadn't taken a hat-trick in the final over of the innings - becoming the first Englishman to do so at the tournament. The run chase always seemed unlikely, and a maiden in the first over of the innings only made the task seem all the harder. And with Moeen Ali, Garry Ballance, Joe Root, Morgan and Jos Buttler amassing just 35 runs between them, a difficult task soon became impossible - with star bowler Mitchell Marsh taking five wickets for 33 runs. James Taylor did at least give England some reason for optimism with a spirited knock of 98, but was left marooned with England on 231 when James Anderson was given out in controversial circumstances to end the innings. Taylor had mistakenly been given out LBW in the 42nd over, but a review reprieved him. However, after that reprieve the umpires then checked footage of the run that Taylor and Anderson had tried to take and discovered that Anderson had been run out via a direct hit by Glenn Maxwell. Under the rules the ball was dead as soon as umpire Aleem Dar had raised his finger erroneously, meaning that Anderson should have been not out. But Dar and fellow umpire Kumar Dharmasena decided that Anderson's run out should stand, bringing and end to England's bitterly disappointing opening match of the tournament.