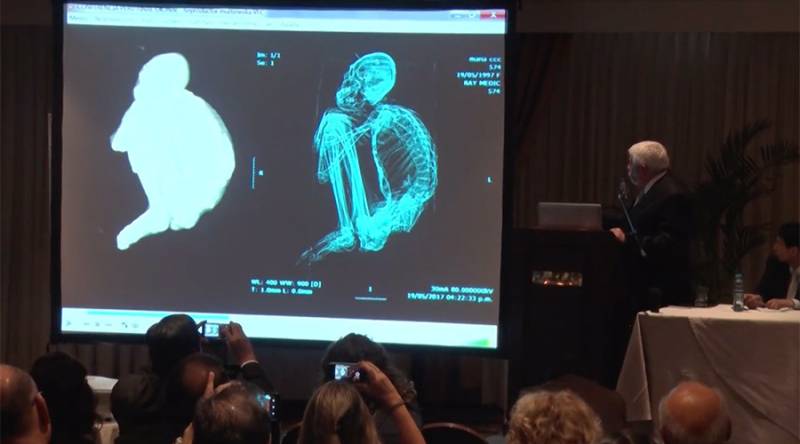 PERU - Mexican Ufologist and journalist Jaime Maussan claimed on Tuesday that a total of five aliens have been discovered in the past two months, asserting that the remains possess qualities "closer to reptiles than humans."

He disclosed this damning revelation during a press conference entitled "The mummies of Nazca" in Peru where UFO enthusiasts and journalists discussed latest aliens discovery near the Nazca lines.

'The bodies are over 1,700 years old, which happens to coincide with the timeframe in which the Nazca lines (geoglyphs or artworks formed by lines drawn in the earth) are believed to have been created' said Maussan.

To substantiate his claims, Maussan included X-rays of the mummified remains which disputed claims made after the initial discovery in June that they were falsified or made of a plaster cast.

"Nobody has proven that it is a fraud. We are going to present preliminary evidence that will determine in the eyes of the media, that these are true specimen,” he said and added: If there are still doubts that this is real, the obligation of Peruvians and the whole world is to preserve these bodies to find a true answer.

NEW YORK - The emergence of an alien hand in a Peruvian cave has stunned top Paranormal researchers who are now more ...

Maussan expressed that apparently the body of a baby with the same characteristics according to the first analysis could be related. However admitted that now it was necessary to perform a DNA test to be able to determine the relationship between the two.

"Those are two bodies and there are three of which seem to have characteristics that are closer to reptiles than to humans. That is, we have five bodies," he noted.

Maussan who is having a major interest in hyping up the existence of extraterrestrials on Earth with dubious evidence has earned criticism as well.

British UFO author Nigel Watson described the latest find as “a plaster cast model,” describing it as “110 perfect fake,” as cited by The New York Post.

According to Watson, the trick was aimed at minting money as attendees paid $300 (£232) to attend the conference and catch a glimpse of ‘aliens’.

'It wouldn’t be the first time a hoax has earned the prankster some substantial money, and likely it won’t be the last' Watson declared.

Popular debunking website Snopes.com also threw weight behind Watson, questioning the authenticity of the find back in June. It cited the ancient practice of artificial cranial elongation as a possible explanation for the appearance of the "fossils."

On the other hand, Maussan stands his ground saying: DNA sequencing and CAT scans were carried out on the remains which were allegedly from between 245 to 410AD but further tests are scheduled to be carried out in the near future.

What could dent the reputation of Maussan is the observation of another extremely dedicated debunker in Peru who has already analysed the information provided and claims that the creatures’ hands are made of a mixture of bones, including children’s bones.

The detailed analysis, carried out by Rodolfo Salas-Gismondi, from the Paleontology Department of the National History Museum of Peru, and associate researcher at the American Museum of Natural History, claims that the anatomical structure of the hands does not make any evolutionary sense and is essentially “incorrect” biologically speaking.

Maussan's presser might be the latest addition to the long-standing debate over the mysterious creatures but observers claim that this bid might be aimed at earning bucks as well, though they admit the 'quality' of fakeness has improved now.