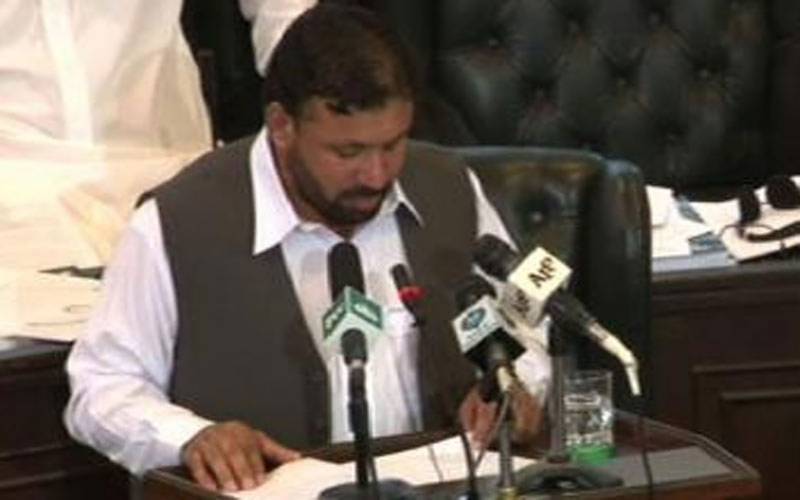 Presenting the budget in the Provincial Assembly, Finance Minister Muzaffar Saeed said that the province will receive Rs293 billion from the federal divisible pool which is 17 percent more than the amount received in the outgoing fiscal year.

Khyber Pakhtunkhwa province will also get Rs35 billion from the federal government for war on terror, about Rs19b as net-profit of hydel power generation and Rs17b as royalty of oil and gas.

The total outlay of Rs505 billion has the projections of Rs166 billion for the Annual Development Programme (ADP) during the 2016-17 fiscal. The provincial government has projected Rs113.5 billion to be generated from its own resources and around Rs31 billion as foreign projects assistance (FPA) while it would also seek a loan of Rs12 billion to meet its development budget deficit.

For education, the KP government has allocated Rs111 billion in the next financial year. A total of Rs16.4 billion will be spent on higher education and secondary education.

The finance minister, in his budget speech, said that the government will open 400 Smart Schools across the province. He also announced to build a cadet college in Swat.

In the annual budget for year 2016-17, allocation of Rs17.47 billion has been proposed for health.

Following in the footsteps of the federal government and other provinces, the Khyber Pakhtunkhwa government has also proposed an increase of 10 per cent in the salaries of government employees.

The KP government has allocated Rs40.91 billion for the pensions of retired government employees.

A sum of Rs3.80 billion has been allocated for Agriculture, while Rs2.90 billion have been fixed for providing subsidy on Wheat.

For irrigation, the KP government has fixed Rs3.42 billion in next year.

Over Rs2 billion will be apportioned for Forestry Department.

For 35 projects of Law and Justice, the KP government has fixed Rs1.37 billion in next year.

The police department in Kyhber Pakhtunkhwa will Rs32.94 billion in next year, while for 59 projects of provincial Interior ministry, the government has allocated Rs2.42 billion.

The provincial government has spared Rs8.08 billion to pay the loans interest in next fiscal year.

For 36 projects of Local Government, the government has allocated Rs6 billion in next year.

A total of Rs33.90b will be given to District Governments in the province.

According to the finance minister, 36,232 job vacancies will be created in the province, while physically-challenged persons will be given Rs1000 per month conveyance allowance in next year.

An amount of Rs29 billion has been allocated for overall development of the province.

Some special schemes such as: up-gradation of seven schools for disabled students, Malakand Expressway and up-gradation of the Pehur hydel project are also part of the budget document.

The KPK government aims to generate Rs113.5 billion from its own resources and about Rs31 billion will be obtained under foreign projects assistance (FPA) programme. The provincial government will also seek loans of up to Rs12 billion to meet the budget deficit. The remaining amount will be obtained from federal government under the NFC award.