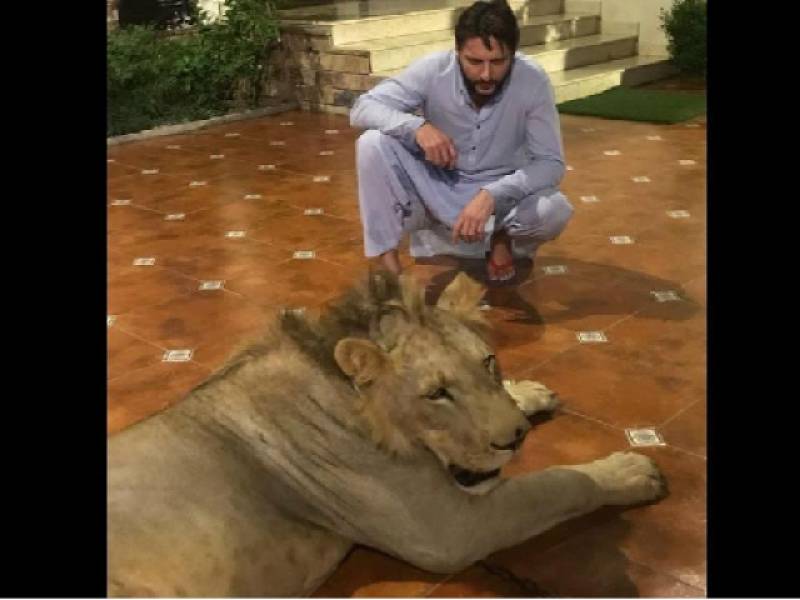 LAHORE - Confirmed by Taj Mohammad Shaikh, Sindh Wildlife Department (SWD) has ordered an inquiry into the presence of a wild animal i.e. lion at Shahid Afridi's home. Action will be taken against Afridi, if found guilty.

Shahid and his six year old were witnessed posing with an African lion inside their house with no barriers in between. Photos of the lion at the former cricketer's home went viral last week which erupted an uproar on social media.

Shahid defended himself saying that the lion did not belong to him and was brought to him by one of his fans.

The owner of the lion, Hassan Hussain told Images that the lion was brought up by him and given to Shahid Afridi for recreation purposes. Hassan further clarified that he had obtained travel permit from SWD: "The lion remained chained during the visit."

Adnan Khan (SWD official), has explained that Mr. Hussain possesses a license for a private mini zoo and keeps animals at his house in PECHS. He further said Mr. Hussain has an animal breeding farm in Mirpur Sakro. Mr. Adnan further said that transporting wild animals is risky and requires special protocols, even if they are tamed.

"There is usually a distance of five to six feet between the visitors and the iron bars of the lions’ cage to ensure safety of the visitors," Adnan Khan added

He concluded his statement saying, "Suspension or revocation of Hassan’s licence is another possibility. In an extreme case, we can even confiscate the animal."