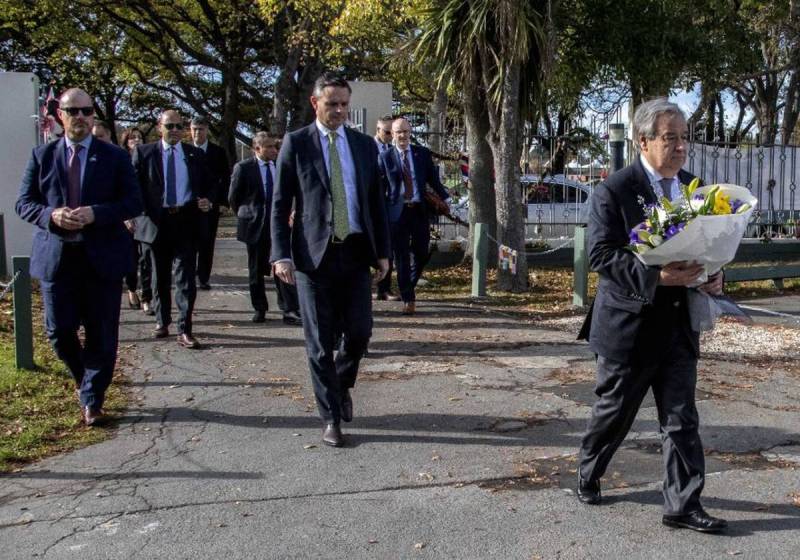 CHRISTCHURCH - UN Secretary-General Antonio Guterres, who is a 3-day visit to New Zealand, paid his respects to the victims of the horrific mosque attacks in Christchurch, where dozens of Muslims were gunned down in two separate incidents during Friday prayers on March 15.

Calling for solidarity to counter the recent upsurge in hate speech, the UN chief visited both Linwood Mosque, where he laid a wreath, and Al Noor mosque, according to a press release issued at UN Headquarters .

On 15 March, a lone gunman killed 51 people at the two places of worship while livestreaming the attacks on social media.

At Al Noor mosque on Tuesday, Guterres told the Muslim community that while there were no words to relieve the hurt and sorrow and pain, “I wanted to come here personally to transmit love, support and total and complete admiration.”

He said that like so many around the world, he had been moved by the poignant stories of compassion and grace from Christchurch.

“But in many ways, I was not surprised. This community reflected a spirit that I have always known to be deeply embedded in Islam – a faith of love, compassion, forgiveness and mercy,” he said.

He recalled that as UN High Commissioner for Refugees, he had seen witness the generosity of Muslim countries opening their borders to people in distress in a world where so many other borders are closed.

“This is in line with what I regard as the most beautiful prescription for refugee protection in world history. It is found in the Surah Al-Tawbah of the Holy Quran: ‘And if anyone seeks your protection, then grant him protection so that he can hear the words of Allah. Then escort him where he can be secure,’” Guterres quoted.

He also recalled that during a visit to Cairo last month, he had been honoured to meet the Grand Imam, Sheikh Ahmed Al-Tayeb, and had thanked him for his recent interfaith meeting with Pope Francis in the United Arab Emirates. The declaration signed by the two leaders calls on people of faith to recognize and respect one another and work together for the good of humanity.

“We must stand together in this period of difficulties,” said the UN chief, adding that: “Hate speech is spreading and public discourse is being coarsened. Social media is being exploited as a platform for bigotry. We must all show solidarity in response to this dangerous upsurge in hatred.”

The Secretary-General spotlighted two recent initiatives he has set in motion two initiatives, respectively to protect holy sites and to address hate speech.

He has asked the High Representative for the UN Alliance of Civilizations, Miguel Moratinos, to develop an Action Plan for the UN to be fully engaged in support of safeguarding religious sites.

Meanwhile, Guterres has also asked his Special Advisor for the Prevention of Genocide, Adama Dieng, to bring together a UN team to scale up our response to hate speech and present a global plan of action.

“Hate speech is spreading like wildfire in social media. We must extinguish it,” the Secretary-General said, declaring: “There is no room for hate speech – online or offline.”

Again quoting the Holy Quran, he said: ‘We … made you into races and tribes so that you may know one another.’

Thanking the Christchurch Muslim community “for doing what you’re doing to help us better know each other – and see our shared humanity,” Guterres said:

“In these trying times, I am here to say with a full heart: You are not alone. The world is with you. The United Nations is with you. I am with you.”

The Secretary-General's visit to New Zealand is part of a tour of the Pacific Island States in which the urgent issue of climate change figures strongly. On Wednesday, he is scheduled address the Pacific Islands Form, being held this year in Fiji, before moving on to stops in Tuvalu and Vanuatu.

Guterres is convening a major UN Climate Summit to be held at UN Headquarters in New York in September.