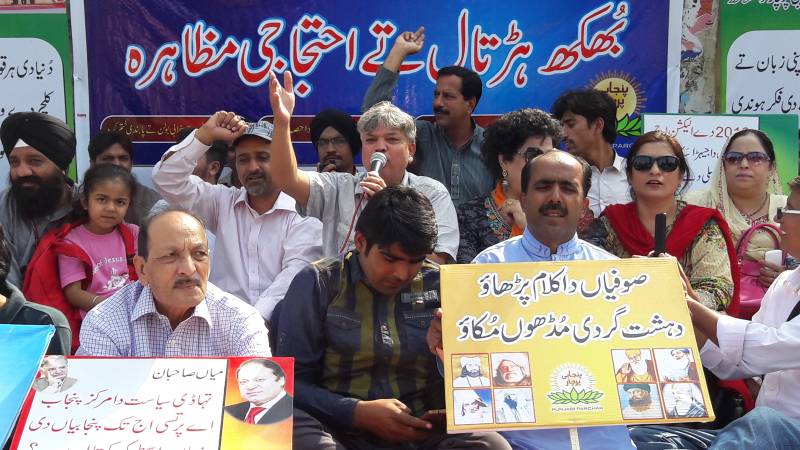 LAHORE - Representatives of nearly a dozen organisations have organised a one-day hunger strike in Punjab capital city to protest discrimination against the Punjabi language.

Seventy years after partition, Punjabi is still struggling to get official recognition. The language is not the medium of instruction in schools and colleges in the province.

"[The] Article 251 of the constitution of the Republic of Pakistan binds the provinces to adopt necessary measures for promotion, teaching and usage of regional languages but Punjab government has not taken any step in that direction and has not adopted measures to teach Punjabi in schools," Raza stated.

The government still got time to take notice of this issue, he said, adding "Punjabi Parchar demands adoption of Punjabi as a medium of instruction till the primary level in schools and as a compulsory subject till graduation. We want a bill to be taken up in Punjab assembly for the promotion of Punjabi."

Prof Tariq Jatala, the secretary general of Punjabi Parchar, said experts around the world have realised the importance of mother tongue in early education and Unesco has also emphasised this, but the government of Punjab is deliberately keeping students in the dark by not teaching the language.

He maintained the government’s policy of ignoring Punjabi language for decades is ruining Punjabi literature and heritage. “To save this language, the (Punjab) government must adopt Punjabi as a compulsory subject in educational institutions,” he added.

Besides Punjabi Parchar, Punjabi Adabi Board and Punjabi Khojgah are also struggling to get official status for the language.

Later, activists from these organisations held a protest rally from Lahore Press Club to Punjab Assembly in which a large number of teachers, students, and members of civil society took part.

Punjabi is spoken by over 44% of 200 million Pakistanis. It is the lingua franca of two-thirds of the population in Punjab but it does not have the status of official language even in the province. In Pakistan, Punjabi is written in the Shahmukhi script.

At reaching the Faisal Chowk, famous poet Baba Najmi stressed on making the poetry of Punjabi Sufi saints part of curriculum. He was of the view that extremism can’t be eliminated until “our children get to know the Sufi teachings of peace.”

Actor Rashid Mehmood, on the occasion, drew the government attention towards the Supreme Court’s order for promotion and implementation of Urdu (as official language in the country) and other regional languages.

Saying the provincial government is bound to adopt Punjabi as official language after the SC decision, Rashid suggested the rulers to stop violating the court’s order.