Pakistan’s agricultural productivity to decrease by 10% till 2040 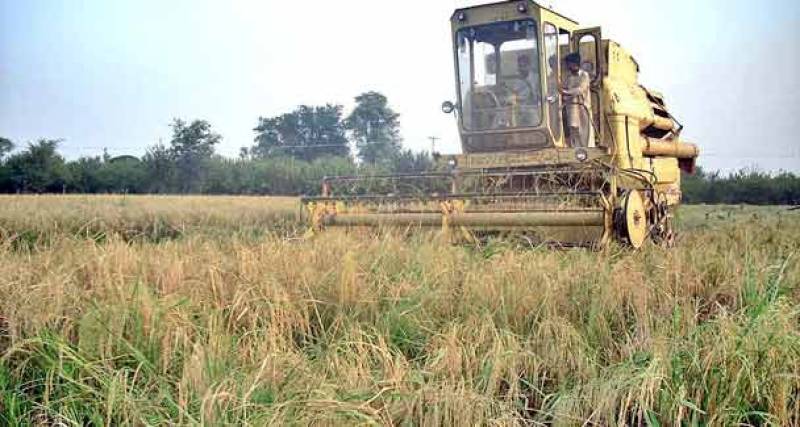 LAHORE (Sarfraz Ali) – Agricultural productivity in Pakistan is expected to meet a decline up to 10 percent till 2040 as global warming is casting worst effects in Indus region, revealed a report by WWF-Pakistan.

World Wide Fund for Nature-Pakistan (WWF-Pakistan), according to the details hosted a media launch of its climate change report titled Climate Change Adaptation in the Indus Ecoregion: A Micro-Econometric Study of the Determinants, Impact and Cost Effectiveness of Adaptation Strategies.

The report was produced in collaboration with the London School of Economics and Political Science (LSE) and the Lahore University of Management Sciences (LUMS) and highlights the impact of climate change on Pakistan’s agriculture and food security.

One of the key findings of the study is that climate change will likely have a large cost on agricultural productivity in Pakistan. In particular, by 2040 assuming a 0.5 Degrees Celsius increase in average nationwide temperatures, an 8-10 per cent loss is expected across all crops corresponding to PKR 30,000 per acre.

The report addresses the optimal public policy response to the cost of climate change and urges adaptation to climate change that can help to improve crop resilience to temperature and rainfall variations. The report findings also suggest that productivity of cotton and wheat crops (but not rice) can be increased by up to 49-52 per cent if 5 on-farm adaptation measures are carried out. Such gains are possible for those farmers who are currently not applying these measures, approximately half of all farmers in Sindh and Punjab. The WWF-Pakistan study author, Ali Dehlavi, an environmental and resource economist, urges a relatively low cost roll out of state sponsored climate field schools in which on-farm adaptation measures are taught. The schools will equip participants with the knowledge of climate resilient methods within tillage, agro-chemical input use, and crop husbandry and irrigation. The cost of roll out for Punjab and Sindh will be affordable and limited to 5 agro-climatic zones (excluding rice belts in western Sindh and eastern Punjab).

Public expenditure on training of farmers is a low lying fruit. Such expenditures are far lower and have higher return on equity, according to Ali Dehlavi, than expenses such canal lining to reduce existing water losses and building of new storage reservoirs. Water supply expenditure in contrast to farmer training programmes is a significant drain on public resources. Previous research argues that to bring about a 1 per cent increase in crop productivity across Pakistan requires the addition of 0.47 bn m3 of water. WWF-Pakistan believes that its latest crop-specific research merits serious consideration in terms of taxpayers’ value for money.

Ahmad Rafay Alam, environmental lawyer and co-author of a political economy study of climate change, water- and food-security prepared by LUMS in collaboration with WWF-Pakistan, said that the recent 18th Amendment has changed the regulatory framework completely. Previously, with the responsibility of preparing and implementing climate policy resting in the Ministry of Environment, policy-making was an easily identifiable responsibility.

He explained after the 18th Amendment several subjects, including environment, natural ecology, health, food production and agriculture have devolved to the provinces, but that provincial governments, especially Sindh and Punjab, have taken no measures to devise their own climate adaptation policies. “The provinces are just as responsible for ensuring water- and food-security as the Federal Government, but there appears no sense of the urgency to respond to the magnitude of the challenge.”

According to Hammad Naqi Khan, Director General, WWF-Pakistan, “Pakistan ranks among the top ten countries vulnerable to climate change. Since Pakistan’s economy depends completely on agriculture, and this report highlights that our agrarian economy will get affected by it. In order to decrease these impacts, it’s extremely important that we include climate change adaptation in our agriculture extension programmes and train our farmers to faces these challenges.”

The study was funded by the Canada-based International Development Research Centre (IDRC) conducted by WWF-Pakistan’s economists in collaboration with LSE economists. The unprecedented nature of the study relates to the application of 20+ years of monthly average rainfall and temperature data, provided by the Pakistan Meteorological Department, at a 25 km grid resolution to a representative sample of farmers across Punjab and Sindh.

The micro-econometric techniques applied to Pakistan’s agricultural productivity are also new and include a so-called Hedonic analysis and counterfactual analysis for non-adapters.