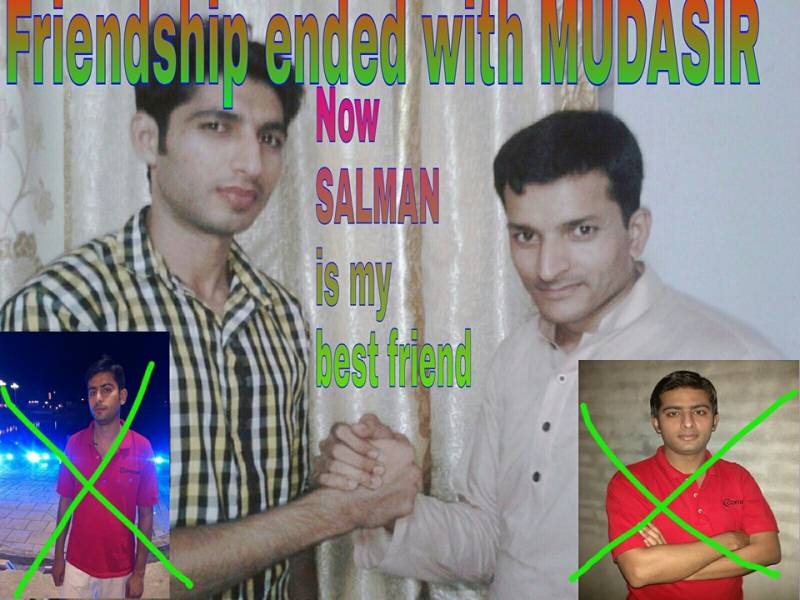 Lahore (Web Desk) - Facebook user from Gujranwala, Asif took to the social networking site on Monday to declare that his friendship with his erstwhile 'best friend' Mudasir is over and that he is welcoming a new 'best friend' in his life - Salman.

According to the photo shared publicly by Asif Raza, his friendship with Mudasir is officially over. Going into the details of the breakup in the description of the photo, Asif opined that he had to let his former best friend go because "he became very selfish, Proudy, and those who shows me Attitude, I keep them under my Foot...... Huuhhh.......Now SAlman AHmad Naqash is my best friend......Its for information to all."[sic]

The photo of the public announcement is already going viral and gaining a lot of attention on Facebook. It has been shared more than 100 times and is getting a steady stream of comments, many from concerned mutual friends and helpful strangers.

Baki jo Allah ko manzoor hy......" (Asif Raza people make mistakes, if Mudasir thinks he has made a mistake then you should be friends with him again.)

Notably missing from the conversation is Salman, the new best friend. While most of the people in the comments suggest staying friends with Mudasir on humanitarian grounds, Asif remains adamant about his decision.

Mudasir and Salman were not available for comments at the time of the filing of the story.

Update: Asif has finally disclosed the reason for the separation on Twitter. He tweeted that, "Mudasir was a good friend until 10 September he report my pic on facebook and now he is alone and I have so many friends

Because I was right."

Author's note: A lot of people on social media are criticizing Mudasir and and being generally negative. This is not right. We should be careful about judging him because he is also a sensitive person and we have not heard his side of the story yet.