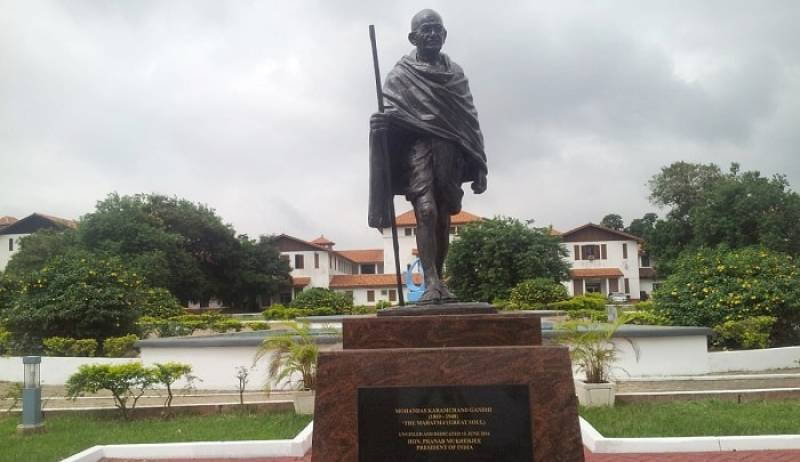 ACCRA - A Mahatma Gandhi statue has been taken off from the campus of the University of Ghana after students and faculty members claimed that the Indian leader considered Africans 'inferior'.

The statue was installed at the university in 2016 but ever since its inception, it stirred controversy and was finally removed in the middle of the night on Tuesday.

Professors at the university launched a petition against the statue shortly after it was first unveiled by India's former President Pranab Mukherjee and it had gained over 2,000 signatures.

A 2015 book by two South African writers highlighted the instances where Gandhi complained that Indians were being compelled to use the same separate entrances as Africans, meaning “their civilised habits … would be degraded to the habits of aboriginal natives”.

“About the mixing of the Kaffirs with the Indians, I must confess I feel most strongly,” he wrote in a letter in 1904 cited by the scholars who were in favor of removing the statue.

In another piece in 1896 Gandhi wrote: “Ours is one continual struggle against a degradation sought to be inflicted upon us by the Europeans, who desire to degrade us to the level of the raw Kaffir whose occupation is hunting and whose sole ambition is to collect a certain number of cattle to buy a wife with and, then, pass his life in indolence and nakedness.”

Students at the university welcomed the decision to remove the statue arguing that the structure reminded them of their inferiority.

Ghana’s former government was reluctant in removing the structure and had stated that the statue would be relocated in a bid not to affect the ties with India.

Meanwhile, in Malawi efforts are underway to stop another Gandhi statue from being erected in the country’s second city, Blantyre.