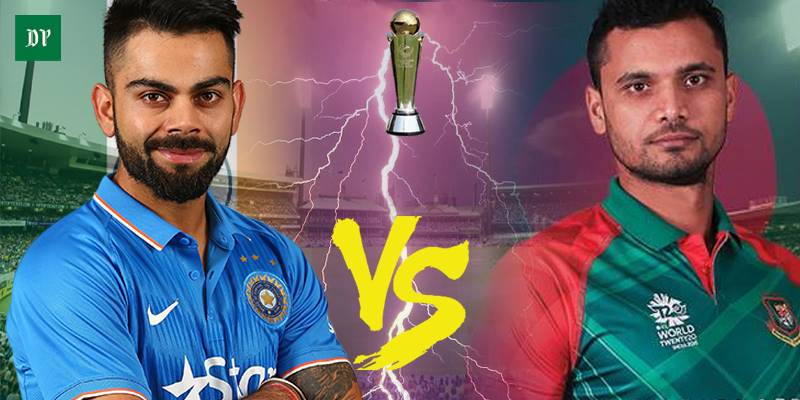 BIRMINGHAM - Rohit Sharma notched up his 11th ODI century (123* off 129), while Virat Kohli scored an unbeaten 96 off 78 balls as India crushed Bangladesh by 9 wickets in the second semi-final of the ICC Champions Trophy 2017 at the Edgbaston Cricket Ground in Birmingham on Thursday.

The defending champions will now face Pakistan in the summit clash on Sunday at Oval.

Apart from Rohit and Kohli, opener Shikhar Dhawan laid the foundation of India's chase with a brilliant 46 off 34 balls. Rohit Sharma was adjudged Man-of-the-Match for his match-winning ton.

Indian skipper Virat Kohli won the toss and choose to field against Bangladesh in the second semi-final of ICC Champions Trophy 2017 at Edgbaston, Birmingham on Thursday (today).

Congratulations to @imVkohli on reaching 8,000 ODI runs! He's done it faster than ANY other player, taking just 175 innings! #CT17 pic.twitter.com/nWclosQHVz

Bangladesh played their 50 overs with three wickets in hand, finishing with 264 runs on the scoreboard.

After losing two quick wickets at the start, Bangladesh sprung back up with a couple of solid partnerships, taking the total to 264. Tamim Iqabal scored 70 runs while Mushfiqur Rahman got 61.

From India, Bhuvneshwar Kumar, Jaspreet Bumrah and Kedhar Jadhav each got two wickets and Ravindra Jadeja picked up one.

Fifties from @TamimOfficial28 and @mushfiqur15 help Bangladesh post 264/7 against India in the #CT17 semi-final - a good total? #BANvIND pic.twitter.com/LucJdiOjGd

Although the odds for today's contest are heavily in India's favour, the last four games between India and Bangladesh have seen both teams win two matches each.

Champions Trophy title-holders India thrashed Bangladesh by 240 runs in a warm-up match at the Oval last month, a fixture where the Tigers collapsed to 84 all out.

The winners of this match will play Pakistan, who hammered England by eight wickets in Wednesday's first semi-final in Cardiff, in Sunday's final at the Oval in London.

India launched their title defence by thrashing arch-rivals Pakistan by 124 runs at Edgbaston on June 4. Both India and Bangladesh retained the sides that defeated South Africa and New Zealand respectively in the final round of the group stage.