Any attempt to harm me would harm you, warns Imran Khan 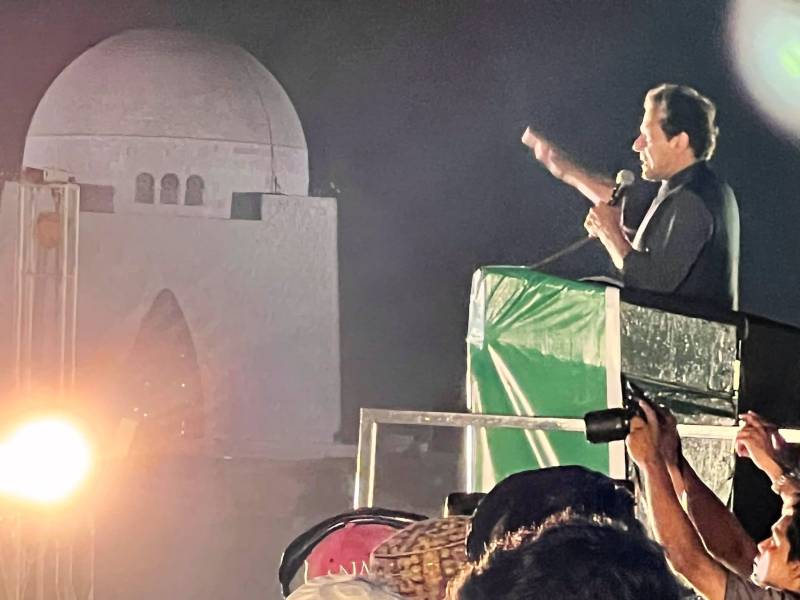 KARACHI – Former prime minister Imran Khan warned on Saturday that any attempt to harm him would harm those who would try to harm him.

He was addressing a massive political gathering in Karachi as part of his mass contact campaign after his ouster from power through a no-confidence motion on April 10.

Khan, who is chairman of his party, the Pakistan Tehreek-e-Insaf (PTI), asked his supporters at the Karachi power show to tell if his government was toppled through a foreign "conspiracy" or "interference".

It was an indirect reference to Inter-Services Public Relations (ISPR) Director General Major General Iftikhar Babar's recent remarks that the United States interfered in Pakistan's internal affairs, but there was no evidence the US was involved in a conspiracy to topple the Khan government.

Khan said in his opening remarks in the port city, "Karachi, I thank you from my heart. I've come to talk some very special things because the issue is of your and your children's future. This conspiracy against our country ... I want you to carefully listen ... was it a conspiracy or an interference? Raise your hands and tell me if it was an interference or a conspiracy.

"There was a conspiracy against this country at a very vast international scale," he said as he explained his political narrative.

He said, "I want to tell the nation that I've never been against any country. I'm not anti-India, anti-Europe or anti-US. I'm with the humanity of the world. I'm not against any nation. I want friendship with everyone but slavery to no one."

Khan said he came to know three or four months ago that turncoats, who later left his party, and some journalists were having meetings at the US embassy. "A journalist told me that 'a lot of money is being spent on us'. Thus, the conspiracy had been in the works for a while and then our US ambassador meets Donald Lu."

He repeated his question for the judiciary, asking what crime had he committed that they felt the need to open courts at midnight.

Earlier, supporters of Pakistan's former ruling party Tehreek-e-Insaf are coming to attend an anti-government rally in the country’s largest metropolis as part of its mass contact campaign following Imran Khan’s ouster from power.

Following a tumultuous political change, Imran Khan was removed as the country’s premier in a no-confidence vote in Parliament, while the cricketer turned politician had kick-started huge rallies to gather public support for early polls.

Today, PTI will hold a public rally at Bagh-e-Jinnah Khan as Imran Khan-led political party has announced a protest against the whole system, calling out foreign countries for interfering in the country’s foreign policy.

Pakistan’s flag all over the venue. 🇵🇰We’re loving these visuals.. the crowd is going to be massive! #امپورٹڈ_حکومت_نامنظور #KarachiJalsa pic.twitter.com/ZJeAJ6P2MR

Party chairman Imran Khan already arrived in Karachi at 4 pm today for the public meeting and he is scheduled to address the rally at around 10:00pm. Reports in the media said as per NOC issued by the district administration, the now opposition party will have to end the rally till 12:00 midnight.

On Friday, Imran Khan shared a video message on official Twitter where he called on overseas Pakistanis to donate money to topple the US-backed PML-N government.

He also mentioned a website that is collecting donations from them to fight against the Sharif-led government and to hold new polls.

Today’s power show will be the second after Pakistan Tehreek-e-Insaf held a major public gathering at Peshawar’s Ring Road, the first rally since Khan was voted out by the National Assembly.

The former ruling party earlier decided to resign from the National Assembly after Prime Minister Imran Khan refused to sit with ‘thieves’ – a move that many saw as an attempt to undercut the legitimacy of the new government.

The move to overthrow Khan also backfired as there are more and more public protests happening almost all over the country while hundreds of Imran Khan supporters also held protests in Britain, Australia and UAE.