‘Struggle not over yet’: Tahirul Qadri vows to take Sharifs to task for Model Town killings 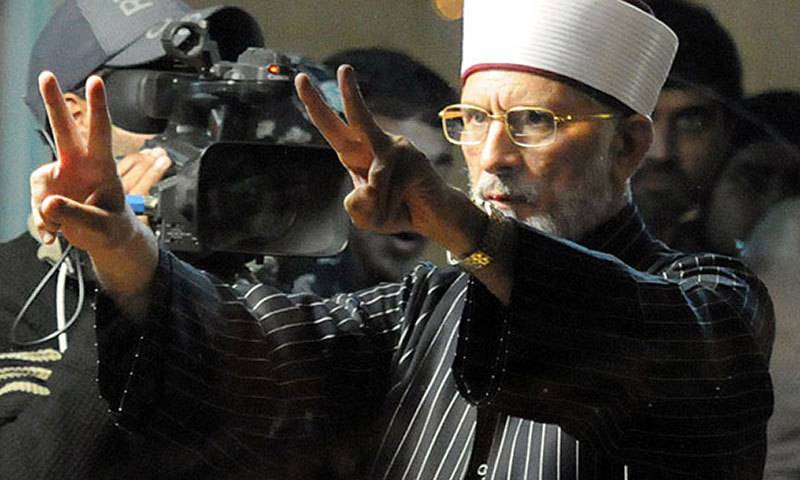 LAHORE - Pakistan Awami Tehreek (PAT) chairman vowed Wednesday he would not stop until the culprits of the Model Town incident are taken to task.

“The struggle is not over yet, we will continue on this path until justice is served,” Dr Qadri said while addressing the families of the victims who staged a sit-in at Lahore's Istanbul Chowk on Mall Road.

The purpose of this sit-in is to "request" the Lahore High Court (LHC) to make the Justice (r) Baqir Najfi commission report on the 2014 Model Town tragedy public.

Along with Qadri, the protesters were joined by Awami Muslim League's leader Sheikh Rashid and Pakistan Tehreek-i-Insaf's Fawad Chaudhry and Firdous Ashiq Awan.

Qadri said that the murderers of the Model Town victims have only lost their position in the government in the Panamagate case, "but the time is not far when you will lose your life for murdering these innocent people of Model Town."

"You [Nawaz Sharif] introduced dirty politics in the country. You started the culture of buying MPAs with sacks of currency,” the PAT chief continued.

"Shehbaz Sharif says the ashraafia have looted the country. Do you know what ashrafiya (elite) means? It is the plural of Sharif in Arabic. So you are right, ashrafiya have robbed this nation," Qadri added.

On Tuesday, Lahore’s Deputy Commissioner turned down PAT's request to stage a sit-in on Istanbul Chowk on The Mall on August 16 due to the imposition of Section-144 in the area.

The local administration had asked PAT to stage their sit-in at Nasir Bagh instead.

However, after meetings with Lahore administration and Lahore business community, Lahore High Court had allowed PAT to stage a sit-in on Istanbul Chowk, provided that it ends after 10pm.

LHC also directed the police to provide security to the participants of the sit-in.