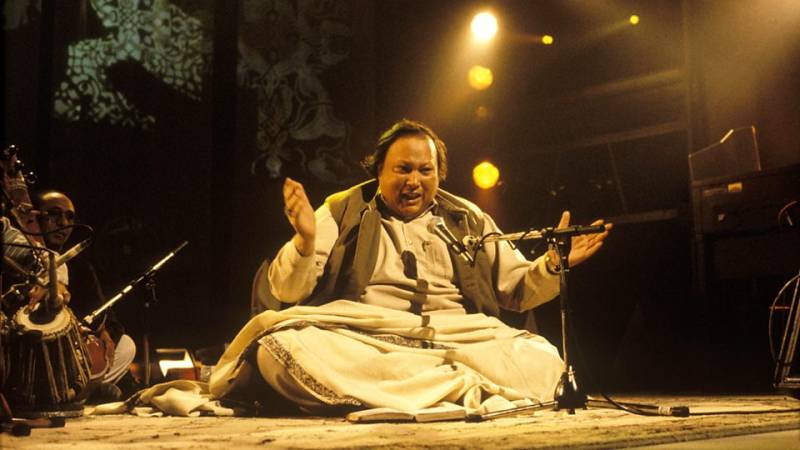 The legend Qawwali singer was born on October 13‚ 1948 in Faisalabad. He was the fifth child and first son of Fateh Ali Khan, a musician, vocalist, instrumentalist, and Qawwal.

He was a singer of Qawwali and considered one of the greatest singers ever recorded; he possessed a six-octave vocal range and could perform at a high level of intensity for several hours.

Extending the 600-year old Qawwali tradition of his family‚ Nusrat Fateh Ali Khan is widely credited with introducing Sufi music to international audiences. He was popularly known as Shahenshah-e-Qawwali‚ meaning The King of Kings of Qawwali.

20 yrs after his death, his music lives on! Check out this #GoogleDoodle from 2015 celebrating the life of legendary Nusrat Fateh Ali Khan pic.twitter.com/3aeJE5ppvZ

He also did music projects with India music composer A.R Rehman and film lyricist Javed Akhtar. He reached out to western audiences through his work with Peter Gabriel on the soundtrack to The Last Temptation of Christ in 1985.

According to the Guinness Book of World Records‚ Nusrat Fateh Ali Khan holds the world record for the largest recorded output by a Qawwali artist--a total of 125 albums as of 2001.

Khan was taken ill with kidney and liver failure on August 11‚ 1997 in London. He died of a sudden cardiac arrest at Cromwell Hospital‚ London‚ on Saturday‚ August 16‚ 1997 at the age of 48.-Online