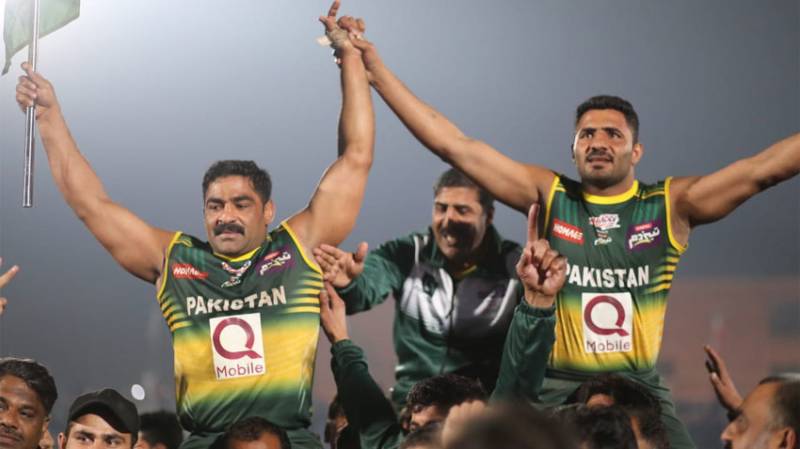 The third place went to Iranian team which toppled Australia by a margin of 54-33.

Both Pakistan and their arch-rivals India demonstrated best kabaddi throughout the tense final match. India, with the score of 24-18, took a lead of six points in the first half.

However, Pakistan regrouped and bounced back in the second half and gradually regained their confidence and ultimately won the historic final against their strong opponents by 43-41.

All the players of Pakistan particularly captain M Irfan, Waqas Butt Shafiq were in best of their performance in a battle of nerves.

Before the start of final, Pakistan’s legend singer Ibrab-ul-Haq mesmerized the public gathered in capacity in the stadium to witness the most exciting and stirring battle of attrition.

Security was so much maintained that a large number of people were not allowed in the stadium despite having tickets.

Pakistan captain Irfan Mana won the toss and decided to raid. In the very first attempt, Pakistan applied pressure on their blue attired rivals to go up in points through Mohammad Shafiq Chishti.

But Vinay Khatri leveled the score. In the fluctuating encounter as one teams took the lead the other came with an equalizer.

At 3-all Pakistan main raiders Shafiq and Waqas Butt conceded three back to back points to be at the back foot at 3-6 and then 4-7. The difference of three points which was increased to six between them remained intact with India showing better strength and technique. And by the close of first half, Pakistan was down with six points at 18-24.

In the second session, Pakistan was in the receiving end as India maintained its lead. At the time when the points were at 24-28 with home team being down, there were some technical hiccups with India claiming Pakistan raider failed to cross the line in 30 seconds but were awarded point and after several reviews the committee declined India’s appeal.

Pakistan later had an incredible fight back from there on to come on equal terms at 32-32 and then went ahead two points. During the entire time the fans remained on their toes and expressed joy on Pakistan’s fight back at 36-34.

Here too the game was again stopped with India calming point on a double touch but that too was rejected by referees. Just minutes before the finish, Pakistan raider claimed a double touch point which India opposed but the later was awarded a point. Their nerve-wrecking attempts continued till the final whistle and ultimately the two teams separated with Pakistan’s winning 43-41.

Earlier, Iran proved too strong for Australia in the third and fourth position match of the mega event here.

Iran maintained its grip on the game from the start till the final whistle. Though in between Australia penetrated to get some points but Iran kept things in total control. Iran led the match 30-16 in the first half and won the match 54-33 by the end of the game.

Ramandeep played a vital role in Iran’s win and was also declared the best raider while in the defence Ali Raza Safari being the best stopper did not allow rivals to get a free hand.