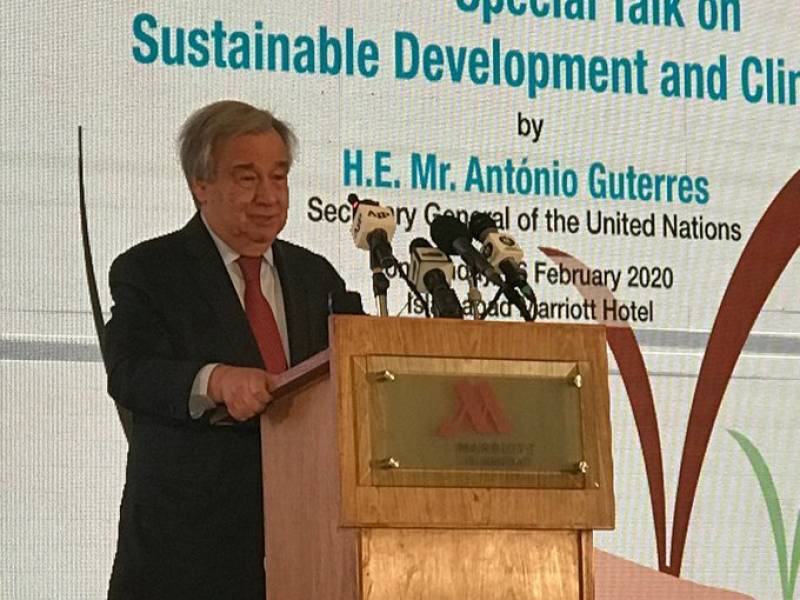 ISLAMABAD – United Nations Secretary General Antonio Guterres Sunday reiterated that there was absolute need for the protection of human rights in the Indian Occupied Jammu and Kashmir (IOJ&K).

During a question and answer session in a talk on ‘Sustainable Development and Climate Change’ the UN global body chief responded that he was expressing clearly that there was absolute need for protection of the human rights in the disputed Kashmir valley and elsewhere in the world.

He said the UN had expressed its strong commitment that human rights must be respected everywhere in the world.

Guterres once again extended his willingness to facilitate dialogue between Pakistan and India over the Kashmir dispute.

He said that he had already made these offers in the past as he was strongly advocating for dialogue between the two neighbours.

The UN secretary general also referred to the UN human rights commission’s role in this regard.

The Indian government had clamped indefinite curfew in the occupied valley by blocking communication means and free movement after stripping its special status through controversial, illegal and unilateral legislation.

To another question about water dispute between India and Pakistan, Guterres maintained that the World Bank was involved in the case.

He said both the countries had a water agreement and through effective cooperation and dialogue issues could be overcome. The UN chief said water must be an instrument for peace and development.