Palestine assumes chairmanship of largest bloc of nations at UN 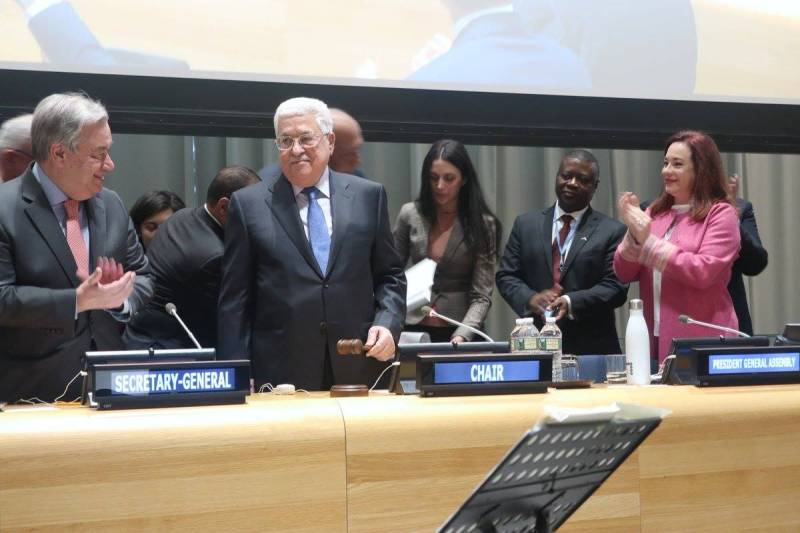 UNITED NATIONS – Acknowledging “a long road ahead” on the United Nations ambitious agenda, Secretary-General Antonio Guterres welcomed on Tuesday “the historic leadership of the state of Palestine” as the new Chairman of the Group of 77 (developing countries).

“Palestine and its citizens have first-hand experience of some of the most challenging and dramatic global issues we face” Guterres said in his remarks at the annual ceremony for handover of the rotating Chairmanship of the G77.

Egypt was the previous chair of the bloc, a coalition of 134 developing countries, along with China.

Taking charge of Group of 77, Palestinian President Mahmoud Abbas slammed Israel’s occupation of the state of Palestine, and condemned ‘terrorism in all its forms’. 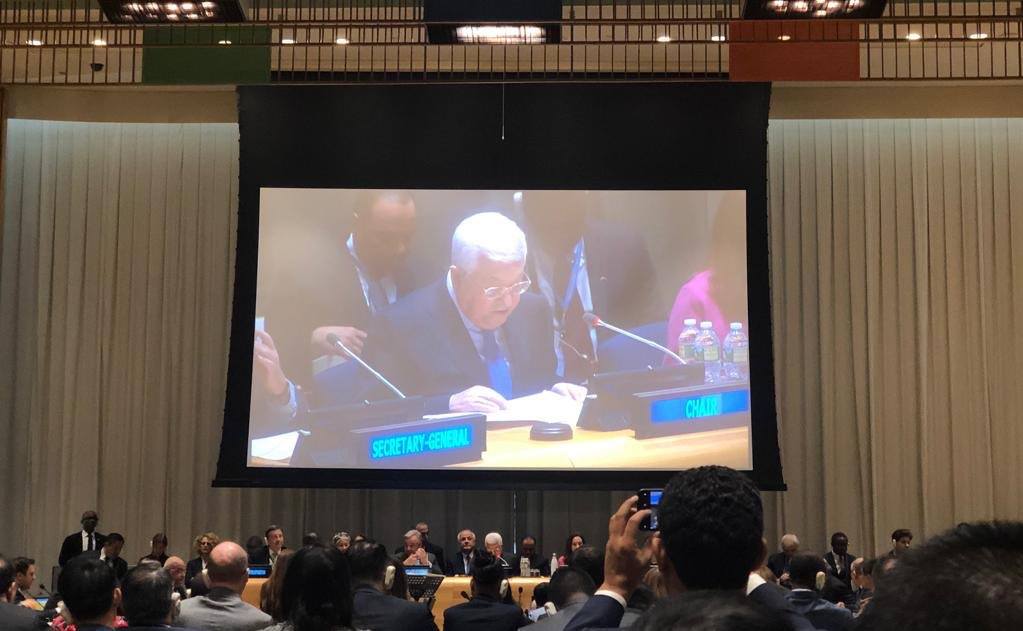 In a speech at the UN headquarters in New York, Abbas called the task of leading the Group of 77 “a great responsibility.”

The decision to elect Palestine as 2019 Chair of the G77 was taken in September 2018 by the foreign ministers of the Groups’ member States.

A month later, the UN General Assembly approved a resolution that enabled Palestine – a non-member Observer State at the world body – additional privileges and rights, such participating in international conferences held under its auspices, for the duration of its role as G77 Chair.

“You are well-placed to take up the chairmanship of this important group of countries,” Secretary-General Guterres said on Monday.

As multilateralism continues to come under “intense pressure from many sides”, the UN chief underscored the importance of the G77 and China’s continued support.

“The Group of 77 and China has demonstrated strong leadership throughout 2018 and proved once again to be a central force in demonstrating that multilateralism is the only way to address our shared challenges,” Guterres said.

I congratulate the State of Palestine as this year’s chair of the G77 and China, and I thank the Egyptian Presidency for its leadership in 2018. The G77 is a central force pushing for multilateral solutions to global challenges. https://t.co/RTwt4F09vi

He credited the Group and the prior Egyptian presidency as having been “at the heart” of the progress made in challenges that ranged from climate change to rising inequality and fast changing and new technologies.

He singled out Egypt’s “highly effective” leadership and advocacy on finance for developing countries to meet their climate action commitments.

He called the group “instrumental” in achieving both: a comprehensive agreement that deals with migration in all its dimensions, the Global Compact for Safe, Orderly and Regular Migration; and a Development System to eradicate poverty, implement programmes on a national level and to position development “at the centre of UN activities”.

“You help to keep the United Nations focused on the issues that count for the most vulnerable, and we owe you a debt of gratitude for your extremely constructive role”, the Secretary-General said.

“If we do not put policies and commitments in place to launch a decade of climate action by 2020, it will be too late to avoid catastrophic climate change with unforeseeable consequences”, he argued. “Many of the Group of 77 countries would be among the first and worst to suffer.” With climate action at the forefront, Guterres laid out how critical a year 2019 will be for ending poverty, reducing inequalities, and transiting to more inclusive and sustainable economies.

He urged the G77 to bring “solutions and commitments” to, among others, the Climate Summit in September and enumerated other upcoming events in need of the bloc’s support, including the General Assembly’s High-Level Political Forum; the high-level meeting to review progress made on the SAMOA pathway for small island developing States to help lay foundations for progress on the Sustainable Development Goals (SDGs); and the Second High-level UN Conference on South-South Cooperation in Buenos Aires, Argentina, this coming March.

“I anticipate that the G77 and China will have a central role in all these negotiations and processes, and I urge you to consider them in an integrated, coherent and unified way” urged the UN chief.

Guterres recalled that last week he informed Member States about the serious financial challenges facing the organization and appealed to the G77 to support his proposals to the General Assembly over the coming months aimed at putting the UN on “sound financial footing,” saying “we must press on and keep up the momentum won over the past weeks and months.”

“In this period of transition and change, we count on the continued engagement and support of the Group of 77 and China,” concluded the Secretary-General.

On Monday, the UN chief met with President Abbas before handing over the Chairmanship, when he offered his congratulations, wished the Group a successful year and reiterated that the two-State solution is the only viable option to sustainable peace.

Calling the work of the outgoing Egyptian Chair, “impeccable”, General Assembly President Maria Fernanda Espinosa Garces, underscored the importance of the G77, which represents 80 per cent of the world's population.

The fact that today we are celebrating the transfer of the Presidency of the Group of 77 and China is undoubtedly a triumph of #multilateralism and a demonstration of how important the role of the #UNGA is. Congratulations to @Palestine_UN, looking forward to working together pic.twitter.com/YohnXAqLEF

“Not only is the work of the Group vital to defending the interests of the global South and promoting economic and social equality in the world, but it must now do so in a more complex international context” that is growing more polarized, she said.

Dubbing it “ a historic moment”, Espinosa recalled the years it took to get to this point and the critical role the General Assembly played.