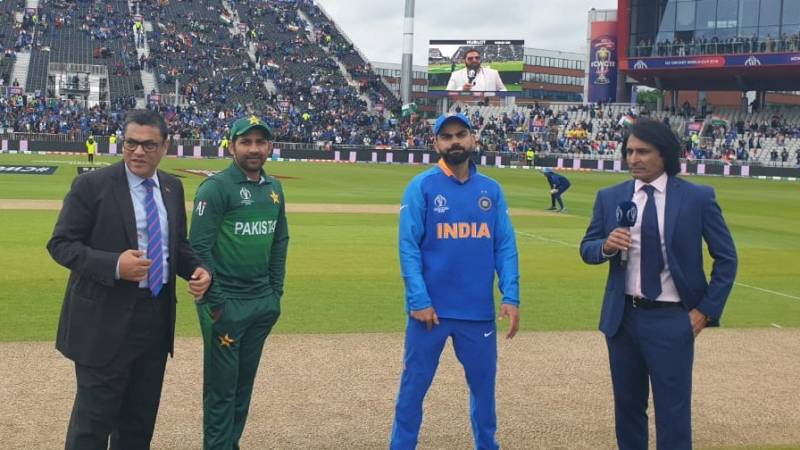 MANCHESTER - India brushed aside Pakistan by 89 runs (DLS) in the 22nd match of the ICC World Cup in Old Trafford on Sunday.

Pakistan won the toss and elected to field first, much to the dismay of cricket fans; the decision apparently proved flawed as India managed to set 337 runs target.

Rohit Sharma scored 140 runs off 113 balls while Virat Kohli contributed 77 off 65 balls. Only Muhammad Aamir resisted the Indian batsmen as he took three wickets for 47 runs.

In response, Pakistan’s batting line-up crumbled in the initial overs as it lost five early wickets with Shoaib Malik going back to the pavilion on the very first delivery.

For Pakistan, Fakhar Zaman made 62 runs off 75 balls while Babar Azam contributed 48; Pakistan made 212 runs in 40 overs.

Our playing Xi for #INDvPAK.

Pakistan have replaced Shaheen Shah Afridi and Asif Ali with Shadab Khan and Imad Wasim. India have made one change to their playing XI as injured Shikhar Dhawan with Vijay Shankar.

?? fans had a special visitor in Manchester, as former captain @captainmisbahpk met with them ahead of the team's #CWC19 clash against India. pic.twitter.com/prch2NziX6

Pakistan fans have been busy showing their support all over Manchester!#WeHaveWeWill #CWC19 pic.twitter.com/vZ8oiPvx1B

This is officially the BEST way to arrive at a cricket match ? #CWC19 | #INDvPAK pic.twitter.com/cuzg1jVSWU